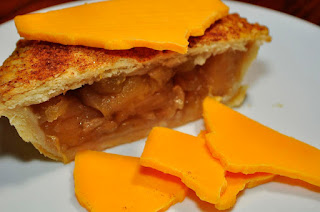 In his 1956 Country Flavor Cookbook at the Conway Public Library's Henney History Room, Haydn Sanborn Pearson explains "that cheese, melted, does something to an apple pie that is wonderfully salubrious." You can see more about this book in a previous blog at this link.

There are many opinions, but few facts about this New England's tradition. There is a saying up here that “an apple pie without the cheese is like a kiss without the squeeze.” I grew up in the south where we would not consider putting cheese on apple pie, but we would put cheese on grits (more on grits in a future blog).

While this pairing of apples and cheese can not bring geographical regions together, it does bring together the sweet and the savory. It also brings together different seasons of the year, bridging the past with the present.

In his 1966 book, The New England Year, (also in the collection of the Conway Public Library's Henney History Room), Pearson explains how the apples were dried in the Autumn.

Strings of sliced apples can be seen hanging above the fireplace in a Winslow Homer print from Harper's Weekly magazine depicting an Apple-Bee. See this link.


I have always been fascinated with food preservation before refrigeration and the many ways the harvest of the past is preserved for the future. A dried apple pie with cheese is a masterpiece of food preservation.

Cheese is made from milk. There is a quite a bit of science to preserving milk through making cheese. In the process, the milk in cheese becomes something completely unlike milk, but cheese has its own interesting and delicious properties. Cheese-making is a long and involved process that makes use of bacteria, enzymes and naturally formed acids to solidify milk proteins and fat and preserve them. Once turned into cheese, milk can be stored for months or years.


The main preservatives that give cheese its longevity are salt and acids. The basic steps in cheese making go something like this (for most common cheeses like cheddar): First, milk is inoculated with lactic acid bacteria and rennet. The lactic acid bacteria convert the sugar in milk (lactose) to lactic acid. The rennet contains enzymes that modify proteins in milk. Specifically, rennet contains rennin, an enzyme that converts a common protein in milk called caseinogen into casein, which does not dissolve in water. The casein precipitates out as a gel-like substance that we see it as curd. The casein gel also captures most of the fat and calcium from the milk. So the lactic acid and the rennet cause the milk to curdle, separating into curds (the milk solids, fats, proteins, etc.) and whey (mostly water). A gallon of milk (about 8 pounds) yields only about 1.25 pounds of cheese -- the weight that is lost is all the water in milk.

The curds and whey are allowed to soak until the lactic acid bacteria create a lactic acid concentration that is just right. At that point, the whey is drained off and salt is added.

Now the curds are pressed in a cheese press -- lightly at first to allow the escape of the remaining whey, then severely (up to a ton of pressure) to solidify the cheese.

Finally, the cheese is allowed to age (ripen) for several months in a cool place to improve its taste and consistency. A sharp cheddar cheese has been aged a year or more. During this time, enzymes and bacteria continue to modify proteins, fats and sugars in the cheese.

There is also a lot of math to milk. Farmers had to be acquainted with the phases of a cow's life and calculate seasonal strategies. Before cows could give milk, she had to give birth. This is called "freshening." Cows can then be milked for 305 days or about 10 months. Then the cow's body needs to rest and store nutrients before she can be bred again and nine months before she has her next calf.

She's generally allowed to "dry" about seven months into her pregnancy. By that time, her milk production is lower, so drying usually consists of cutting back on milking and the amount of grain fed. When she stops producing milk, dairy farmers continue feeding her large quantities of hay or keep her on pasture. Allowing a two-month dry period before her next calving lets her mammary glands rest and prepare for the new baby and subsequent freshening… and that is just the tip of the iceberg.

With the Fall harvest preserved and summer's best cheese aged anywhere from two to twenty years.

Pearson goes on to explain...

"nothing complicated?" I have never read such a detailed yet poetic receipe that implies the need for a ruler to get the proper depth of the pie. The re-hydrated apples have a certain texture and chew to them, that makes each bite burst like gummy bears.

Pearson's books are full of country wisdom. The book jacket of The New England Year shows activities of each season and includes biographical information on the author (click on images to enlarge them). 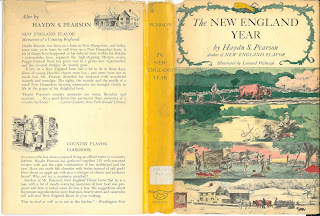 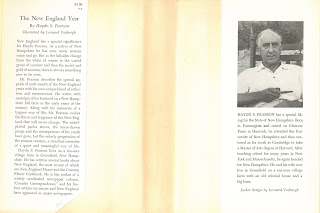