Back to the Future Again

No, this is not a sketch of a space ship for the upcoming Star Wars movie. 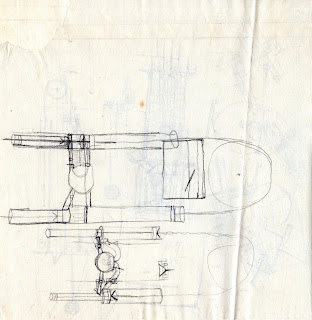 These drawings are actually over one hundred years old. They date back to the middle of the 19th century. They are from a file labeled "inventions" in the Samuel Bemis papers at the Henney History Room of the Conway Public Library. 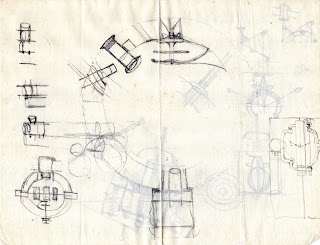 If you have a guess as to what they might be about, please drop us a comment!
They certainly are mysterious and intriguing. 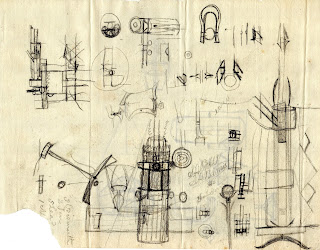 Some insight as to their intentions may be surmised by learning about the life and times of Samuel Bemis. While they look like they might be for ray guns, spy satellites, hover board motors, or flying cars, they are probably more likely related to the work he did with watches, cameras and dental tools.
Tomorrow is “Back to the Future” day. It’s a time to celebrate and reflect upon what we had imagined would have come to pass by now. For more on this event and other bits of "the history of the future" send us a comment or call us at the Henney History Room of the Conway Public Library at 603-447-5552.

Posted by Mount Washington Valley History at 3:24 PM No comments: 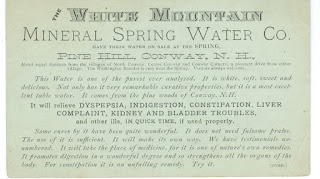 Without the watchful eye of the FDA, advertisers in the past could promote their products any way they wanted. In an earlier post we mentioned the Conway Mineral Spring as an early tourist attraction. Actually there were several mineral springs in the area. The one at Pine Hill seen in this advertisement card was the largest. (click on the image of the card to see it better).

You can see they made outrageous health claims for this water. The water came packaged in specially sealed barrels with a ready to use keg tap. On the back of this card under directions, it reads "As a curative, in most cases, use two goblets on retiring and two on rising, and one with each meal. If the stomach is weak, warm it at meal time." So now you have it, warm bottled water with a meal. Just in time for flu season!

Posted by Mount Washington Valley History at 1:03 PM No comments:

Last week Conway officially opened its newest “old” place to visit; Founders Park in the Redstone area. Ushered in by dignitaries at a great ceremonial event that included a wonderful birthday cake and the unveiling of a 250th souvenir history booklet, the new park offers some interesting insights into local history.

In the spirit of the season, as we approach Halloween, I wanted to share with you some stories about the ghost town on Meeting House Hill. A certain “spirit” pervades the area. By “spirit” I mean several different things. First there are the ghostly spirits that are said to linger there due to old graves buried under the road. Then there is the spirit of the past and the history of the original Meeting House and burned bridges. There was the dream of a town center or “green” and other plans that did not come to pass here. Finally, there is a new “spirited” educational program designed to teach about the meaning of the pioneering spirit of our early settlers and the lessons we can learn from their experience of building a town and creating a community.

Let’s start with the historic landscape. The new Founders Park is located at 35 East Conway Road. Some people consider it to be a scary place just because of its location next to the Conway Police Station and NH Circuit Court. It is in kind of a sketchy neighborhood. It’s not the most scenic part of town. Approaching it from Route 16, one drives past an abandoned granite quarry that was recently looted and vandalized, rusting railroad tracks, warehouses, industrial buildings, and oil and propane storage tanks.

Nearing our destination you pass an extensive junk yard on the left and high tension power lines draping through thickly wooded wetlands on the right. In contrast to this blight, an early map shows that this was once intended to be Conway’s center piece. There are actually three versions of this map at the Conway Public Library - on paper, parchment and linen.

A detailed study of these maps reveals this unrealized, discontinued dream. Comparing these maps with a variety of topographical and relief maps help explain why this was at first settled as the center of town and why it later became bypassed by history. Even a quick cursory view shows that Conway was originally conceived of as a square with sides of six miles each. Natural features on this map include the Saco River, Conway Lake and the open area north of the center represents the location of Green Mountains. A detail of the center section shows lots laid out for the the “Centre Square,” or Town Green and the Meeting House, our first Church.


The new commemorative sign at the park tells the history of the Meeting House. A portrait of the first long time preacher, who started service in 1778, Dr. Nathaniel Porter is hanging at the Conway Public Library. Some say he looks stern and spooky with kind but sad and haunting eyes.

Near the Meeting House was the “resting place” of the early settlers of Conway. Tradition says that some of the remains were not reburied, but just paved over, when the new road was put in.

The new Founders Park is also the beginning of a short trail that leads to another Conway Park that reveals more of the story. Both ends (start and finish) of this short trail are anchored by distinctive sentinel or story trees. One a pine, the other a maple.

You can see the large branches of the so-called “wolf” or “pasture” pine on the left side of the photo of the opening ceremony above. Notice the contrast between the tall straight “mast” type trees on the right, that were specifically preserved in the charter for the King’s Royal Navy with the
massive white pine “wolf” tree on the left.

If you know how to “read” the landscape these wolf pines tell you that they were originally born in a sunny open field or pasture and that they were twisted into a scary shape when a pine weevil nibbled on its terminal bud over and over again. A sunny field like this can be seen just around the corner as you make your way down Meeting House Hill Road.


A field like this represented the hopes, plans, dreams of the early settlers. For farmers making their way past fields like this for church services, open fields like this were practical emblems of worldly bounty and prosperity in this life and symbolic of a spiritual resurrection from death and eternal life seen both in the green grass and the trees tinged with Autumn colors.


At the end of the road on a spot overlooking the Saco River is a massive gnarled and twisted maple tree. It is a sentinel tree, proclaiming, hundreds of years of service, annually providing sweet sap for settlers to boil to make maple sugar and syrup. Nature was the grocery store for our early settlers.

Nature also provided challenges. While the Saco helped restore the fertility of fields with periodic flooding, it also needed to be crossed for civic and commercial travel. The Smith-Eastman Bridge seen in the painting below once stood at this location.


Today only blocks of cut stone are left as evidence to testify to its important historical role.

To help explore more about the history of Conway and to understand the skills and knowledge required to build a town and create a community, the Conway Public Library's Henney History Room is offering a series of free educational programs that will offer hands on, interdisciplinary lessons that will cover a wide range of topics.

To learn about the pioneering spirit program or for more history on this or other White Mountain topics contact the Curator at the Conway Public Library’s Henney History room.


Posted by Mount Washington Valley History at 5:32 PM No comments: