When this you see remember me 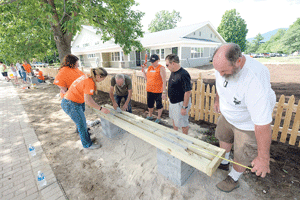 A recent Conway Daily Sun article reported on the contributions of the  Mountain Valley Garden Club, Home Depot Associates, and a crew of vets from the American Legion installing five memorial benches and a flower garden at the North Conway Community Center. 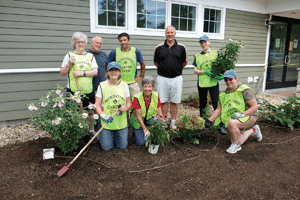 The article explains that “Each bench represents a different branch of the service: Army, Navy, Air Force, Marines and Coast Guard, with a plaque on each.” This project is only the most recent in a long tradition of using the landscape to share memory. Throughout the area, there are many memorial benches, flagpoles, sidewalks, roads, walls, watering troughs and even commemorative mountains, rocks, and trees honoring our heritage. 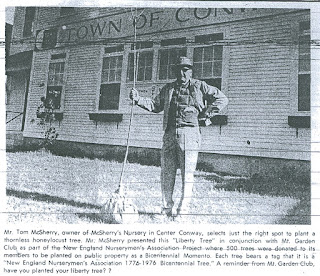 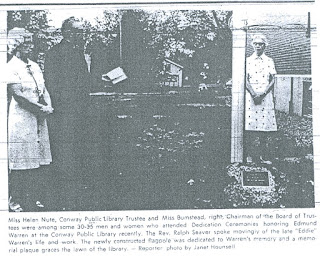 One of our ongoing projects involve researching, mapping and documenting our landscape of memorial. Without the story behind the name on the marker, the memorial becomes meaningless. If you have any information on any of these monuments, please comment us as we work on this project, Thanks!


Posted by Mount Washington Valley History at 10:44 AM No comments: 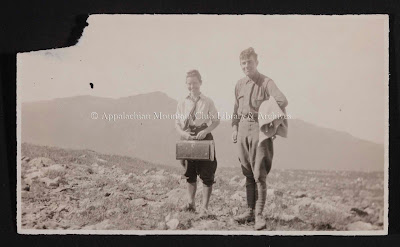 I recently attended a wonderful program on hiking in the White Mountains given by the Appalachian Mountain Club archivist. If you have been following this blog you know that we have been doing research in the Samuel Bemis papers on his early role in developing and promoting trails in the region. You would also know that we have a new initiative to digitally share our collection and connect it with related items in other collections. Inspired by this lecture I browsed around the AMC archives website and noticed a photograph with the caption “Alpine Garden, June 29, 1919. Mount Adams in back [Clyde H. and Hilda Smith carrying a small suitcase…” I suspect it is not a suitcase, instead I think it is more likely a vasculum. 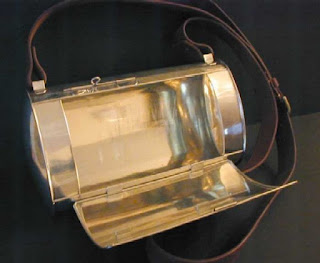 These items, now forgotten, and as we will see now mistaken for a suitcase or lunch box, were once common and easily recognized, when poet scientist scholars were treated like rockstars, botany was a verb, and botanizing was as popular an outdoor activity as pokeman go.

We had some experience with these items when we developed an artist-explorer character for a living history museum in Indiana a number of years ago. We had a reproduction made for the program.

Several nice drawings and a good explanation for this item can be found in the self-help book, Botanizing: A Guide to Field-Collecting and Herbarium Work, 1899, by William Whitman Bailey. 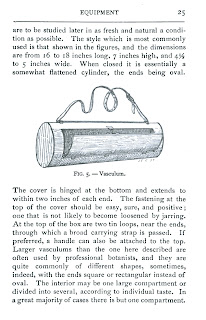 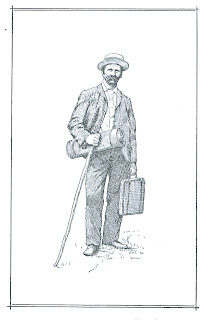 The idea was for the vasculum to be a rigid container used by botanists to preserve and transport field samples. The main purpose of the valsculum is to transport plants without crushing them and by maintaining a humid environment. Wet moss was often packed in with the plant samples to keep them from drying out. 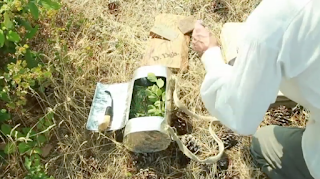 The famous scientist Linnaeus called it a vasculum dilletanum, from Latin vasculum - small container and dilletanum, referring to J.J. Dillenius, Linnaeus' friend and colleague at the Oxford Botanic Garden.

Along with a plant press and several other simple tools, anyone could create their own herbarium.

The small item below belonged to the artist Benjamin Champney and was identified as a “lunch box.” While it may have indeed served that purpose, it looks like a vasculum to me too. 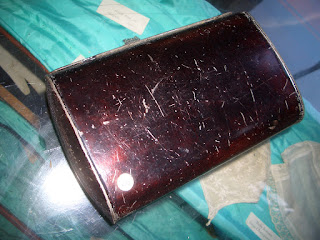 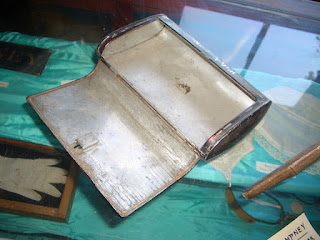 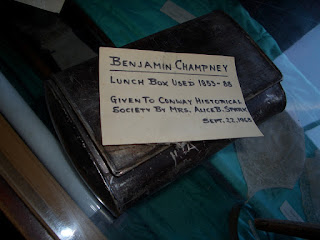 Champney and other White Mountain artists sketched "plein air" out among the field and forests of Conway and surrounding towns. In the photo below you can see Champney with a white umbrella slung over his shoulder. The umbrella was used to diffuse light on the sketching or painting surface. 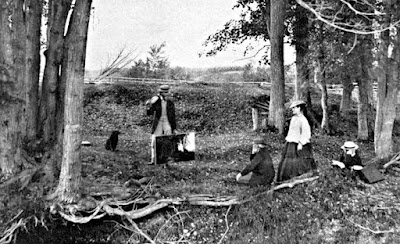 Here is a Chamney folding stool he used in his "field work." 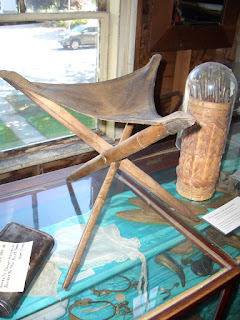 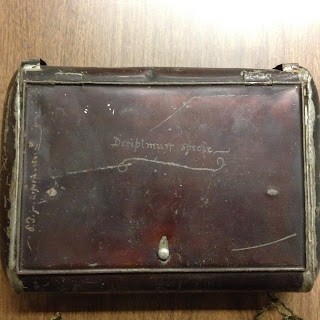 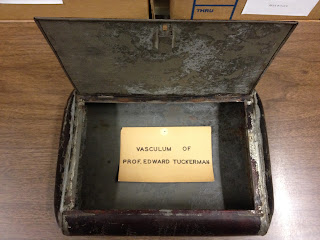 The eggplant (aubergine, purple) color finish was a popular style known as pontypool or japanning. There were many different recipes to create different colors and shade but they all provided a corrosion resistent coating for the sheet iron the vasculum was made from. They usually included some combination of asphaltum and linseed oil and heated to make it the finish both tough and durable.

However, it does scratch fairly easily. As you can see in the pictures here of Tuckerman’s vasculum, he used that to write notes on his botany box (click on the pictures to enlarge them). 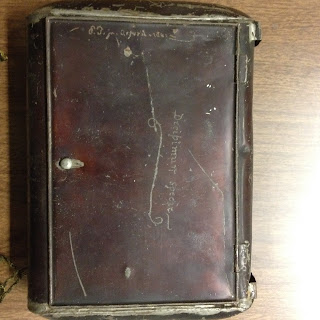 On the front cover he has inscribed his initials (E.T. jr.) and the date 1841. It is hard for me to tell if the middle word is a place or a time. I think it reads August, but it may also be a place. As we will see he records dates and places around the surface of the vasculum.

Also written on the cover is “Decipimur specie” a warning in Latin that comes for the Art of Poetry by Horace. Roughly translated it is a warning not to be deceived by the semblance of what looks to be right or true, but to explore more deeply and not be fooled by appearances. 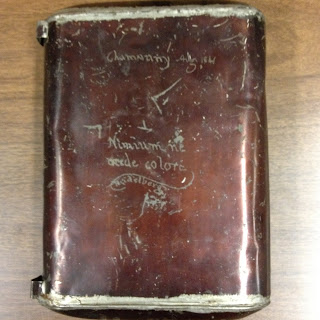 This Latin phrase is from Virgil’s Eclogae and can be translated to something like don’t put too much faith in your appearance, beauty fades. In it can also be seen references to color fading and the bloom of a flower withering away, both quite appropriate for an object intended to preserve both color and bloom. 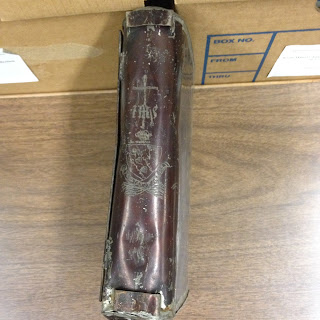 The most decorative work is reserved for the top end, with the hooks for the carrying straps. You can imagine it placed on the shelf this way so it would appear almost as a book. Here we can see a Christian cross alluding to his service in the ministry and the letters IHS referring to Jesus 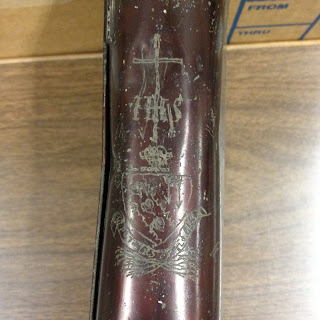 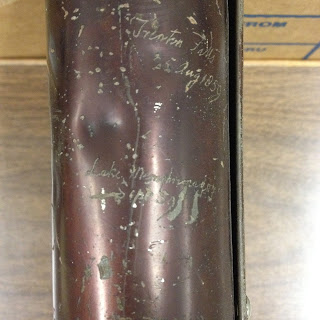 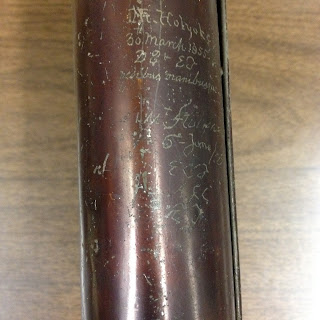 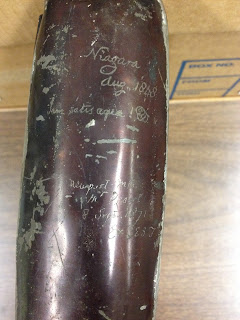 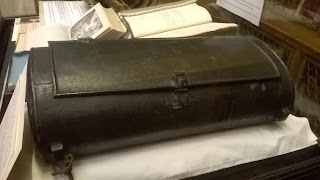 Edwin and Nellie Teale’s vasculum presented to them by the Baldwin Bird Club in 1959. 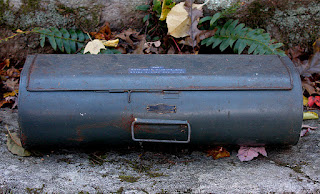 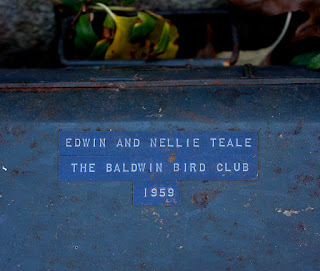 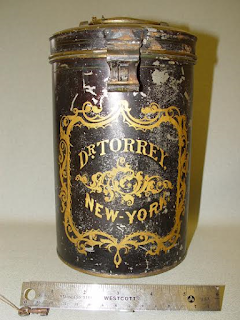 Antique vasculum for sale online showing a variety of condition and shades of color. 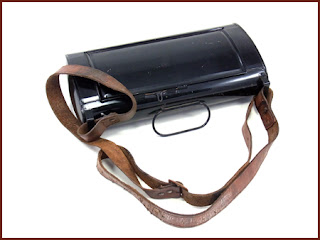 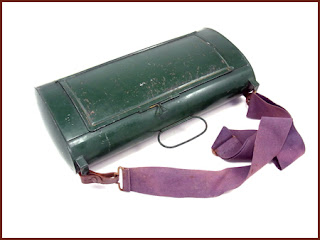 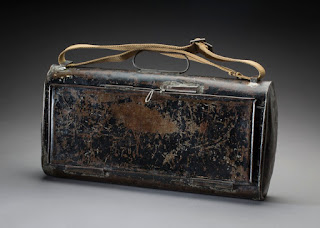 As always, if you have thoughts or questions, please comment us or contact us at the Conway Public Library’s Henney History Room.

Posted by Mount Washington Valley History at 7:47 AM No comments: