KNOW all Men by thefe Prefents

At first it might seem that I have lost all sense of orthography (proper spelling, capitalization, &tc.) but see for yourself.

This is the top part of a recent donation to the Conway Public Library's Henney History Room. There are several things to note before we even show you the rest of the document. Look at the first line. It reads "KNOW all Men by thefe Prefents." It seems like it should read "know all men by these presents." Whoever printed this part seems to have used "f"instead of "s"  in a couple places.

Well if you look close, you can see it is not an f, rather it is what is known as a long, medial, or descending s. One of most famous examples of this can be seen in our Bill of Rights. Here is one of the 14 originals preserved and displayed at the National Archives in Washington D.C. For more on the originals see this link. 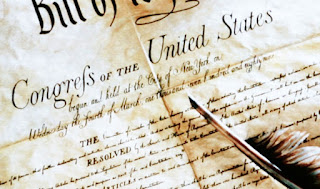 You might wonder who spends their time studying fonts? Did you know that the study of fonts it is a graphic design specialty. We actually have several books about it at the library.

A great new study of typography, and another recent donation to the circulation collection, is W.A. Dwiggins: A Life in Design, written and designed by Bruce Kennett. See link here. This book also has a great chapter on marionettes but that later blog.

But back to our main topic. The phrase, "Know all men by these presents" is commonly found in legal documents to this day. Generally it means that this document announces the transaction.
How would "presents" be pronounced? It is a verb or a noun or an adjective?  It can in fact, be all three. 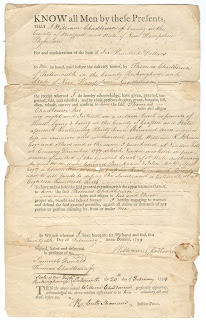 Near the signature of William Chadbourne can be seen the remains of a wafer that sealed the document.

You can see a previous blog on this kind of wafer here.

The printed text was pressed so hard that it embossed the paper and created a relief that can be seen from the back. 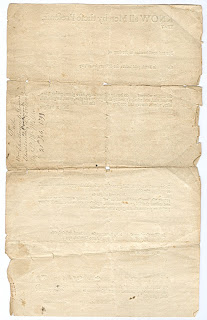 Now to the paper itself. You can see that is the type of "laid" paper used during the period. See a previous blog here that explores laid paper and watermarks.

You can tell from the folds that the document served as its own envelope. It was folded to fit in a "pigeonhole" in a desk. See our previous blog on pigeonholes and desks for more about that. 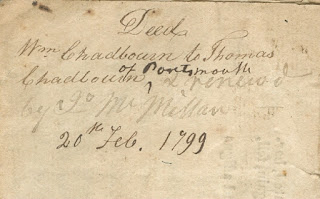 Now let's look at a summary of the document. 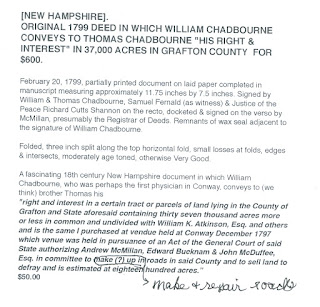 So this is an introduction to our new donation. We have covered a lot and have not even looked at the second line of the text. More on that later.


Posted by Mount Washington Valley History at 12:52 PM No comments: