I dropped by the Conway Cemetery this morning, the day after Memorial Day, and was pleased to see the site well cared for and the stones decorated with flowers, flags, and markers for veterans. As part of our ongoing research into Conway’s memorials, I wanted to share what we have found so far about one of the veterans listed on the Conway Honor Roll on the library grounds. 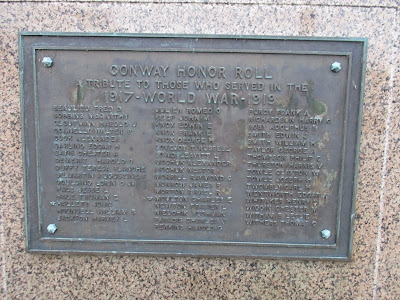 There are two names with stars next to them indicating that they died during their time in the service. This is a good example to point out both the strengths and the limitations of the resources available through the Conway Public Library. We have a special library edition of Ancestry.com with access to a vast collection of documents. 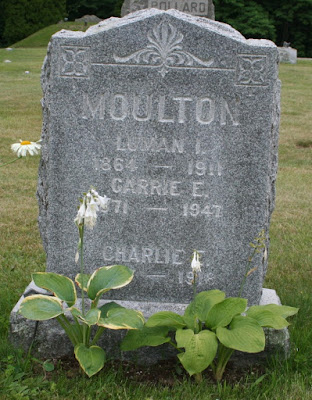 It is also a little tricky to find this stone. While it is in the location on the website (plot A1), its actually carved on the back (facing west) of another stone marked Cooledge that faces west like most of the other stones. Some details about Charlie Moulton and his family can be explored in the 1910 census (click on the image to enlarge it). 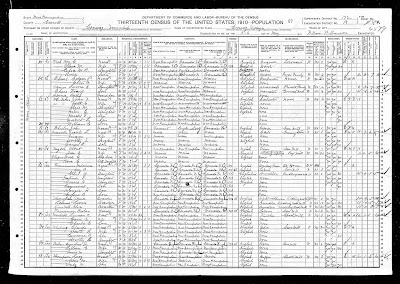 His father Lumen was a finisher at the spool mill and his mother was named Carie, spelled Carrie on the gravestone. The census also tells us that many of his neighbors also worked at the spool mill or the saw mill. From the draft registration card we can see that he was born in Albany, NH on April 13, 1896 and at the time of his draft he was a cook. 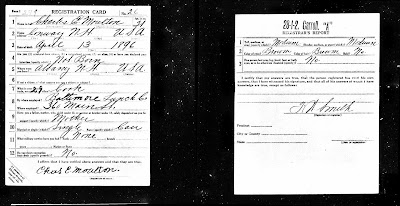 Following this link we can see
a Charles Edward Moulton, coalheaver, New York division, died April 20, 1918 at marine hospital, Stapleton, NY from pneumonia, next of kin, Mrs. Carrie Moulton, Conway NH. Perhaps this was the so called "Spanish Flu" that killed millions in 1918? More on this and the other folks on the memorial later.


Posted by Mount Washington Valley History at 10:16 PM No comments:

One hundred years ago this month. Remembering one war while trying to avoid another. (Note: click on images to enlarge them)

While Conway's residents received little actual news about the war raging in Europe, the Reporter's May 4, 1916 editorial page opined on President Wilson's diplomatic efforts to avoid war with Germany.
Germany had been sinking ships and according to the paper, Wilson was writing "yet another note" to complain and ask them to stop. The writer commented ironically and dramatically that Wilson "gave Germany four days to make a reply, and he said he really meant it. But the Kaiser didn't believe it and has taken his time."
The implication is that Wilson's efforts were useless. The editor concludes sarcastically that, it is "Pretty near time Wilson was writing another note" suggesting that Wilson will continue doing paperwork while Germany destroys ships and kills people.
Wilson's inaction (other than writing complaint letters) is contrasted in a paragraph below on England's problems with the Irish insurrection on the home front, the surrender of 10,000 troops in Turkey, the loss of a battleship and 25,000 men (wonder why the battleship takes priority over the loss of life?). In any case, the "indomitable spirit" of Britain in the form of "Johnny Bull" is contrasted sharply with Wilson's lack of effective action.

The criticism of Wilson continued in the May 18 edition of the paper with the editor taunting the "school-teacher President" with his continued intellectual efforts to stop the German war machine. 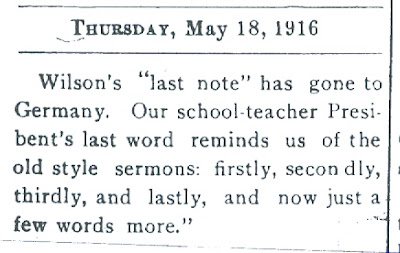 Also in May, there is news about the "Usual Exercises for Memorial Day." The focus is on the Custer Post of the GAR, a civil war era veteran's group. The article points out that the ranks grow thinner as the veterans of that war age and pass on. The commemoration began the Sunday before the holiday with church services.
Memorial Day proper would begin when "comrades and others appointed, will decorate the graves of soldiers..." followed by an assembly at Red Men's Hall in Conway at noon for a dinner provided by the Women's Relief Corp. This would be followed with a parade that was to include a long list of other fraternal orders.

Continuation of this article

May 31, 1916 will see the Battle of Jutland, but we won't hear the news until June. Stay tuned to see how that is reported ...
Posted by Mount Washington Valley History at 3:08 PM No comments: 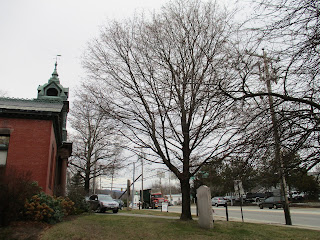 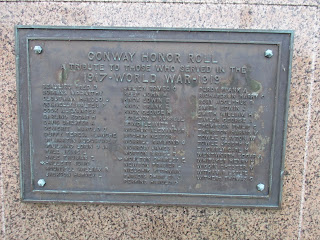 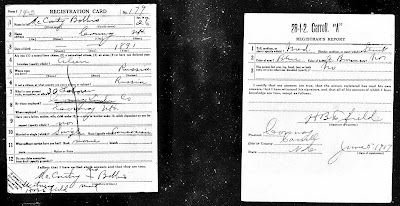 Posted by Mount Washington Valley History at 4:46 PM No comments:

Keep the register of the thermometer...

More discoveries from the Bemis collection...
(click on images to enlarge them, see transcription below image) 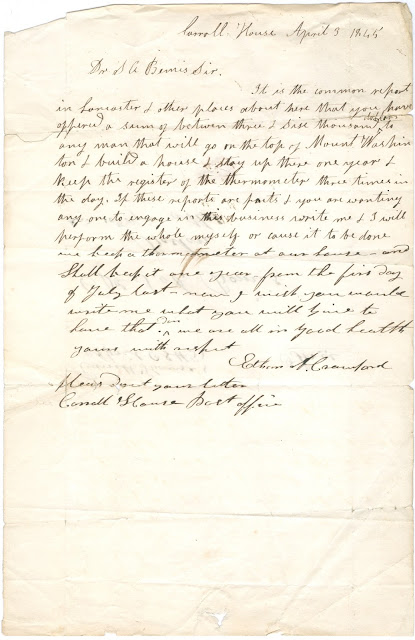 Carroll House April 3, 1845
Dr. S. A. Bemis Sir,
It is the common report
in Lancaster & other places about here that you have
offered a sum of between three and six thousand dollars to
any man that will go on the top of Mount Washing
ton & build a house & stay up there one year &
keep the register of the thermometer three times in
the day. If these reports are facts & you are wanting
any one to engage in this business write me & I will
perform the whole myself or cause it to be done.
We keep a thermometer at our house - and
Shall keep it one year from the first day
Of July ? - ?  & wish you would
Write me what you will give to
Have that done. I am/ we are all in good health
Yours with respect
Ethan A. Crawford
Pleas post your letter
Carroll House post office
The letter was folded so that the back of the papers served as an envelope. It was addressed to Dr. S. A. Bemis, Boston, Mass (no street number) and closed with a red oval shaped seal. There is a notation that it was received 10th April. It was then folded to the standard "pigeon hole" size that most desks of the time used and perhaps tied up in "red tape" like many of the other Bemis papers. 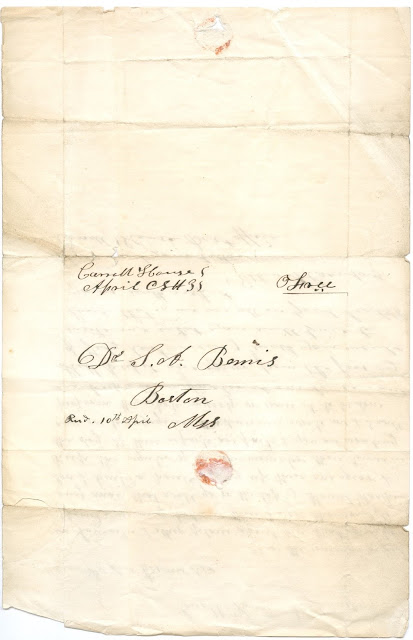 We don't know Bemis's response. However, history tells us it took another 25 years for the summit to be occupied throughout the winter for the first time. In 1870-1871, a scientific team including J.H. Huntington (after whom Huntington Ravine is named) over wintered. The photographer team of Clough and Kimball documented the adventure. Some of their photos can be seen here. 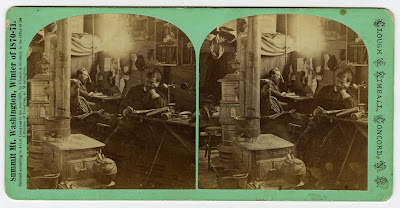 Engravings and a detailed history of that expedition can be found here.

According to Julie Boardman's When Women and Mountains Meet, the first women to climb Mount Washington in winter were two of Ethan Allen Crawford's daughters, Eluthera Crawford Freeman and Placentia Crawford Durgin. (How do you like those family names?)

Posted by Mount Washington Valley History at 8:16 AM No comments: