Next week Conway will celebrate its 250th birthday as a Town. Chartered on October 1, 1765, our early history is literally written on the rocks of Meeting House Hill overlooking the Saco River and the wetlands to the west. 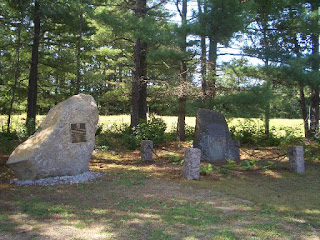 The new marker on the left was carefully chosen to match the size and shape of the earlier marker, creating a sculptural continuity of space and time. Archival photos from the Conway Public Library's Henney History Room show some of the celebrity the original marker has received. 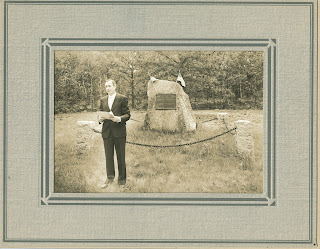 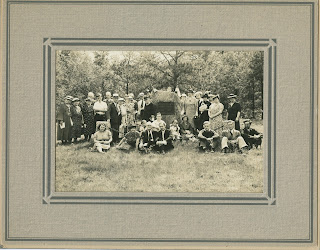 Similar to "Plymouth Rock," our new granite marker will bear witness to Conway's history, only with more accurate supporting documentation.

A lot of history can be found along the shore of the Saco as it was a key factor in shaping Conway's history. Through a combination of maps, photographs, field work, newspaper clippings, town records, and other archival treasures folks can learn about the legacy left to us from our earliest settlers. We hope you appreciate this gift of history to the Town and visit the Henney History Room to learn more!

Posted by Mount Washington Valley History at 12:52 PM No comments:

Lessons from the Land: Reading the Historic Landscape

Yesterday, I was honored as a historian to be part of three separate ribbon cutting events at Conway historic sites: the Marshall Conservation Area, the Abenaki Encampment and the Redstone Quarry. Along with the soon to be opened Kennett High School covered bridge each of these sites will offer new opportunities for research and education through a new initiative of the Conway Public Library’s Henney History Room.

Beginning this Fall, we will be offering free history education programs and curriculum support to all area schools and educational groups, such as home schools, boy scouts, girl scouts, etc. The program will involve three main approaches; research at the Henney History Room, outreach programs at the schools and guided field trips to historic sites.

Building on the archival resources at the Henney History Room such as historic photos, deeds, land records and surveys, aerial photos, old maps and business records, activities can include power point programs, web based projects, hands on and interactive displays of artifacts, reproductions, and photographs, trail maps and interpretive signage.

Posted by Mount Washington Valley History at 10:13 PM No comments:

On the Boulder Trail: A Case of Mistaken Identity and the Search for a Mysterious Missing Rock

For a small library in largely rural New Hampshire, the Conway Public Library has some unique treasures and quite a few curiosities. In the ornate reading room in the original section of the library one can lounge in large comfortable leather arm chairs in the shadow of a remarkable fireplace. 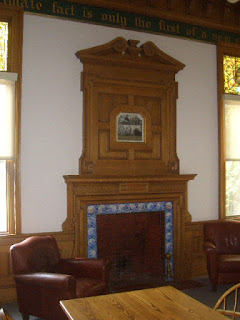 Over the fireplace in gilt letters edged in burgundy is stenciled Emerson’s transcendental quote that “Every ultimate fact is only the first of a new series.” And so it is.

Enshrined on the mantle within a decorative frame of fielded panels is a series of four photographs. With everything else going on in the library, its easy to excuse that the fact that few patrons probably take the time to notice them, and of of those who do pause, even fewer could mine their meaning and understand their significance.

Most over mantle images are colorful and decorative landscapes intended to express the grandeur of the owner's wealth and taste. These are indeed landscape images of a sort. They are an odd and rare documentation of a bit of industrial history, showing the process of quarrying the “Washington Boulder.” 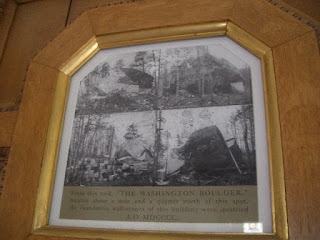 The caption reports that “From this rock, ‘THE WASHINGTON BOULDER,’  located about a mile and a quarter north of this spot, the foundation wall-stones of this building were quarried A.D. MDCCC.” The cornerstone of this brick edifice was laid on this foundation in 1900 and the library opened to the public in 1901.

We will come back to this photo array later, but now let’s follow another clue to the story in the form of a small oil painting located 350 miles away in the Luce visual storage and study collection at the Brooklyn Museum of Art. There one may find Aaron Draper Shattuck’s painting titled, Madison Boulder, Conway, New Hampshire ca. 1858. 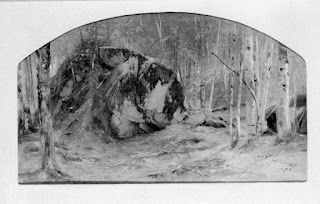 This is part of a larger project on the lure of nature and the role of the White Mountains in the beginnings of today’s eco-tourism movement. This in turn is evidence of the long and ongoing tradition of yankees selling of air, water and rocks to flatlanders, yielding insights into the history of tourism and recreation, changing tastes for using and “consuming” the views, and even the interesting role of religion, politics, poetry and science in our understanding of nature.

Many early attractions with given names designed to appeal to Victorian tastes in politics, religion, classical antiquity and Romantic poetry and the then fashionable science of geology (Diana’s Baths, Cathedral Ledge, Devil’s Den, Wizard Birch, Washington Boulder, etc.)
Geologists of the period were like today’s rock stars, drawing thousands of people to their lectures.
In doing research on this subject, we have found evidence of a number of exotic lost natural tourist attractions such as serpentine and donut trees, the wizard birch, buttermilk hollow and the often mistaken location of the original cathedral woods, etc.

Most references go over the head of millennials unless they google the terms (which they should).

As part of all this, we think that the Brooklyn painting is certainly not the Madison Boulder, but instead may be a rare artistic rendering of the rock pictured in our overmantle pictures, the Washington Boulder, which is long gone but not forgotten.

The Washington Boulder was in fact a once famous tourist attraction, featured in numerous period guidebooks. This was before the now popular zip lines, Saco River outfitters, shopping outlet centers, Valley Original restaurants, vacation condos and so on.

Even then one of the guidebooks reports that Conway was “visited by people who wish to enjoy quiet rest and pure mountain-air, and who dislike the brilliant display of N. Conway (North Conway).”

Back to the boulder question. A comparison of the Brooklyn painting above with a number of photos from numerous collections concludes it’s clearly not the Madison Boulder.


First of all the Madison Boulder is not in Conway, it’s in nearby Madison, NH. so there is some kind of a mistake there in the title. Secondly the Madison Boulder was not discovered until well after 1858. We have asked the Brooklyn Museum for more information to find out why it has that title and date and await their reply.

But what makes us think the Brooklyn boulder is Conway’s lost tourist attraction, the Washington Boulder? In part it has to do with the unique shape and size of the rocks as well as their history.


We can do a little field work and find the Madison Boulder easily. It’s preserved at 473 Boulder Road as part of the State Parks and Recreation system. But what can we find of the Washington Boulder?


To continue our story, let’s flashback to the summer of 2004. I spent part of that summer at Kay Morgan’s teacher institute. As part of our final assignment, I chose to work on field trip options at the site of the soon to be built Kennett High School (Where later our son graduated from, and where our daughter is currently entering her senior year).


They were planning on building a road from the north as the entrance to the new school and were exploring the site of the White Mountain Mineral Spring where the school was to be built.


Consultants had been hired to do architectural, historical and archaeological research on the spring house and bottling plant that had been there.

In my research I became interested in the long abandoned and overgrown road that had come to the site from the south when the mineral spring was a popular tourist attraction. It was along this path that the famous Washington Boulder stood.


My next stop was of course to our friendly neighborhood archives, the Conway Public Library’s Henney History Room. When I asked the archivist, David Emerson, if he knew the exact location of the Washington Boulder, he coyly replied “its around here somewhere, let’s go see”


I was soon to discover he meant that when we were sitting in the middle of the Henney History Room in the library’s lower level, we were literally surrounded by the Washington Boulder in its quarried state as the foundation blocks forming the walls of the room.


True to his nature, he only revealed his meaning after a tantalizing and twisting journey. David was always full of Moxie. We put on our imaginary pith helmets and took the elevator up to the photo array mounted over the fireplace where he told me the story of how the rock was quarried.


Then he led me down the secret steel stairs, where the massive granite foundation blocks are exposed revealing the distinctive manufacturing tool marks of the period. Then back to the archives, where he unfolded period maps and books to reveal more details about the rock’s history as a tourist attraction. So now we know where the Washington Boulder ended up!

There is a lot more to this story. For a fuller backstory on this or other subjects shoot us a comment.

Rock on Conway! And remember, life is short, don’t take anything for granite.

Posted by Mount Washington Valley History at 8:17 AM No comments: