What device can measure mountains and predict the weather?
Just inside the entrance to the Henney History room we have a set of instruments that includes a thermometer, barometer and hygrometer. We use them to monitor the environmental conditions of the archives. 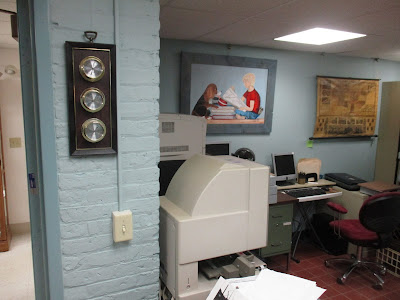 We covered an early reference to a thermometer in the White Mountains in the Bemis papers in an earlier post. In the future we will explore some of his references to other scientific devices such as a "live box" microscope and camera lucida.

In his 1784 "Journal of a Tour to the White Mountains" Jeremy Belknap lists some of the instruments he brought with him including 2 barometers, 2 thermometers, 1 sextant, 1 telescope, 2 surveying compasses, and 1 chain (surveying chain).

Belknap goes on to explain that he had some bad luck with this tools, "1 barometer broke before we got to the Mountains. 1 thermometer rendered useless after we left the Mountains. 1 compass broke, the other barometer broke. These accidents were unavoidable, considering the rough ways we passed through, the rubs and knocks we endured in the woods ; though, happily, no person received any greater damage than a broken shin."
"As we passed through Eaton and Conway, the appearance of so many people, more than ever had been seen at once traveling that way, was very amusing to the people. We had 3 guns and 1 pair of pistols in the company. The barometers were slung across the back of one, and the sextant was carried in a large bag. This uncommon appearance was the subject of much speculation; and the good women, understanding there were 3 ministers in the company, were in hopes we should lay the spirits which have been supposed to hover about the White Mountains, an opinion very probably derived from the Indians, who thought these Mountains the habitation of some invisible beings, and never attempted to ascend them."
The barometer could well have been similar to this Mountain barometer that doubled as a walking stick. 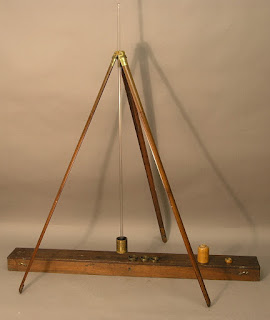 Today you can use apps on your cell phone to determine elevation, see the weather forecast, and even map your gps coordinates, assuming you get cell service.