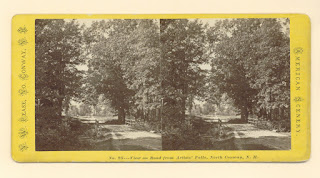 One of the biggest hits with elementary school kids at the recent history fair in Conway was the Henney History Room’s stereo viewer which creates a 19th century version of 3-dimensional virtual reality. Marketed for its educational value and purchased primarily for its entertainment value, the stereoview was like television and the world book encyclopedia put together, bringing the world and current events into Victorian parlors even in the most rural of areas.


Printed on specially curved cardboard, a pair of photographs were set apart just wide enough to give the illusion of depth and allow a remarkable immersion into the scene. Subjects ranged far and wide, from common to exotic, and covered subjects like the San Francisco earthquake, St. Louis World’s Fair, castles in Ireland and ancient buildings in Italy.


Views of White Mountain tourist attractions were sold as popular souvenirs. One of the world’s largest producers of stereoviews were the Kliburn Brothers of Littleton, NH. From from 1867 to 1909, they manufactured over 600,000 cards. Their views became the most widely distributed in the United States.


The view pictured here was number 25 of N.W. Pease’s series of American Scenery. Pease ran his studio and gift shop out of the building that is now Zeb’s Country Store in North Conway.


Titled “View on Road from Artists’ Falls, North Conway, N.H.” it depicts a shady dirt road crossing a bridge leading the viewer through the woods to an open field. While on the surface the scene appears generic without any clear distinctive landmarks, mountains or buildings one must consider the historical context. In fact, the artist brook area of North Conway was once a famous and popular key destination and promoted in a large number of paintings, prints, and guidebooks.


Why would this be such a popular spot? Again consider the historical context. If you look at numerous other photos, paintings, prints, you can easily get the sense that most of the New England landscape was cleared for farming during the time these views were being published.


Historians estimate that 80% of New England was cleared for farming then, leaving only 20% forested and much of that used for logging and firewood. Today that ratio is almost reversed. Forested areas are much more common to us now. Also remember that the city folks who rode the trains to Conway had no air conditioning and streets often filled with horse manure, then you can begin to see how the cool shady spot depicted in the stereoview along with the fresh mountain air, smaller population, and clean water from our mineral springs could be so appealing. In fact, it still is today.

Posted by Mount Washington Valley History at 10:44 AM