Breaking news of March 1916, One hundred years ago this month.
(click on the images to enlarge them).

“Next Monday’s program at Masonic Hall will rival in interest any previously shown.” This is how the silent film “The Crimson Wing” was promoted in the first column on the front page of Conway's Thursday, March 2, 1916 edition of the Reporter newspaper.
The article made the point that while it is a thrilling six-act photo-drama of war and has several hundred feet of film taken in France on the border line of Germany showing the French army in maneuvers “it is strictly neutral, taking sides with no faction. The climax is a touching love scene, uniting a man and a women of opposing nations.”
This is how Conway and the nation seems to have wanted to see the building conflict one hundred years ago this month, with America as neutral and the end result peace and love.
The article goes on to say “The drama is presented in a manner that not only gives offense to none, but makes the heart go out in sympathy to all the battling nations and yearn for a permanent peace.”
By the beginning of March 1916,German Zeppelins had conducted air raids over England, U-boats had set a blockade of Great Britain and sank the Lusitania, where 1,198 civilians including 128 Americans died, and the nine-month long battle of Gallipoli had begun, poison gas had been used, and the war was well, well entrenched. In February 1916, the Battle of Verdun had begun. It will prove to be the longest battle of the war and cause an estimated one million casualties. Ironically, in November 1916, Woodrow Wilson will be re-elected President of the United States with the campaign slogan: “He kept us out of the war” only to have him ask Congress to join the war in April 1917.
With this larger picture (and a bit of the past’s future) in mind, here is some of the news from the Conway NH home front during March 1916, one hundred years ago.
Next to the article/advertisement on the film, The Crimson Wing, was the Conway Town Warrant to see what sum of money the town would vote for the library, snowing bridges, and to "see of the town will vote to raise and appropriate the sum of seventy-five dollars ($75.00) to be paid Custer Post, G.A.R., for Memorial Day, May 30, 1916."

Note: the silk flag and record book of the Custer Post are preserved at the Conway Public Library 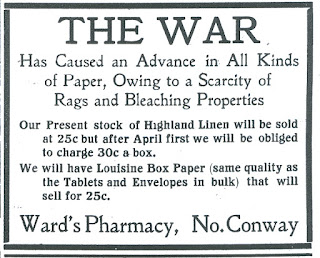 There was a reference to German spies in Glen and/or Jackson and the ad above noted the price of paper was going to go up due to the war.


Interestingly, there was more printed in March 1916 about the Civil War than what we have come to know as World War One. The paper included J. F. Robinson’s recollections of the 1864 Battle of the Wilderness. This was the first battle of Lt. Gen. Ulysses S. Grant's 1864 Virginia Overland Campaign against Gen. Robert E. Lee and the Confederate Army of Northern Virginia in the American Civil War.

Throughout the month there were more details on cows and cribbage than the war. There were more column inches and ink dedicated to clearing stones out of farm fields than coverage of battlefields
The longest article related to the war was about the words of war, those clever new terms created by soldiers such as pip-squeaks, gasper, lead swinger, and dickey scrapings. In a bit of gallows type humor, they define the military base as “a place where troops are kept until they are so fed up that they do not mind getting killed.”
For what ever reason, practical or political, the war raging in Europe was not on the forefront of Conway’s home front, at least not yet, but it will ...