While astronomical spring began on March 20th, we still have snow covering our ponds and lurking in the shadows of our woods. You often hear spring before you see spring. This past weekend we rambled down to the ocean and heard spring peepers in the marshes between the beach and the mainland. It won't be long before we hear them up here.

Earlier today a local message board post revealed how sound leads to quite a sight, "a friend and I walked on Whiteface Intervale Road. We heard the peenting of at least three male woodcocks in the fields. We got to within 30 feet of one, hid in the shadow of a tree, and listened — occasionally seeing some movement on the ground — to the performance for at least a half an hour. Peent, peent, peent, . . . then the silence for perhaps a full minute during which time he flies straight up 100–200 feet, and then an almost imperceptible twittering/whooshing sound as he spirals — feathers out rustling in the wind — back to the ground to begin peenting all over again. My friend, a birder, tells me this ritual is typically performed at dusk. Indeed, in videos online, you can actually see the woodcock in flight."

That reminded me of a story. In 1891 Frank Bolles published “Land of the Lingering Snow” subtitled “Chronicles of a Stroller in New England from January to June.” The book consists of 26 short essays arranged in chronological order.

In his chapter “The Vesper Song of the Woodcock” Bolles wrote “Easter Sunday fell this year on March 29th…” (130 years ago today). He goes on to compare the joyous song of the church choir "almost as sweet and praiseful music as the children of the woods were making in Nature's own sanctuaries."

He is talking about birds and frogs.

Throughout his writings Bolles uses sound and color to enhance his descriptions of his adventures. At sunset he recalls "Across the west only a single band of orange light remained. In the zenith stars were beginning to shine. A strange cry came from the meadow grass." 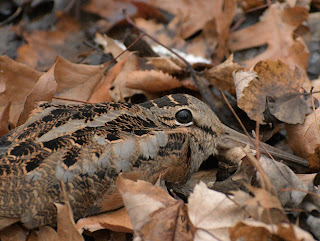 He goes on to describe the sound and sky dance of the woodcock or timberdoodle. It has been a while since I have seen one, or at least noticed one, as they have excellent camouflage.

Below is a diagram on the woodcock sky dance.

The four steps of the dance are as follows:

1. Stands in place while turning and emitting a periodic buzzing peent.
2. Flies up in a spiral, its feathers creating a tweeting sound.
3. Zig-zags back to the ground while singing.
4. Waits for a mate, then starts over if necessary.

For more information including some video see the link here.

Bolles explains that the sound "came clearly from the upper air, but from a point swiftly changing, apparently revolving I fixed my mind intently upon the sound. It was a series of single musical notes uttered rapidly by some creature flying swiftly in an immense circle high over the meadow. It seemed as though the sky were a vast vaulted whispering gallery under whose dark blue dome a singing reed was being whirled round and round, dropping sweet bits of sound as it sped through the air. As I listened breath lessly, this sound was smoothly changed into another. The creature was descending: its notes fell more slowly but more distinctly; they were sweeter, rounder, more liquid. They came down, down, and then ceased, quenched in the damp grass." 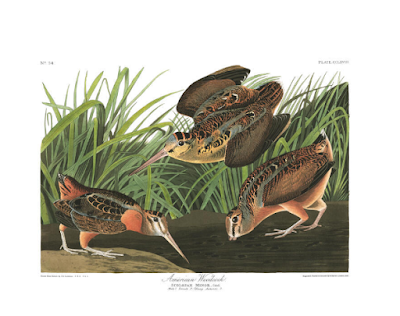 Audubon's print and text about the woodcock can be found here. With the bird on the right, you can see why they are nicknamed bogsuckers.

Bolles closes his chapter with "Those who know the plump and meditative woodcock, gazing by the hour together down the line of his bill into black mud, will wonder with me that his courtship can arouse him to such airy fairy efforts, and at so romantic an hour."