Fire up the grill! Spring is coming 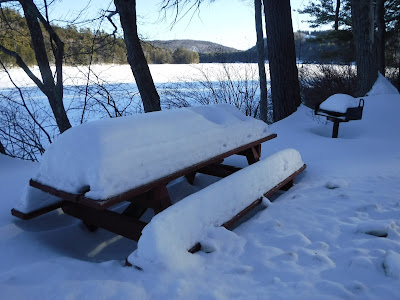 My thoughts turned to warmer days ahead as I passed by this scene in Eaton on my way in to work today. When I got to the Conway Public Library's Henney History Room I began preparing for the upcoming season and looked up an 1833 poem by the "Eaton Poet" about the birth of spring and the death of winter from his book "The Farmer's Meditations." You can read it here. I see his poetry as a door to perceiving an earlier time at this place when most people were farmers.

There is evidence of the Mount Washington Valley's agricultural heritage all around us, if we learn to read the clues. This post is part of our ongoing effort to explore and document this part of our local history. If you find this approach to art, history and nature interesting we offer free outreach programs to schools and community groups on this and many other related subjects. Just give us a call.

If you are looking to study old farm tools, you don't have to go far. Just north of the library, one passes this item below, seemingly cast off by the side of the road. Many would not know what it is, other than one's idea of a decorative yard sculpture. 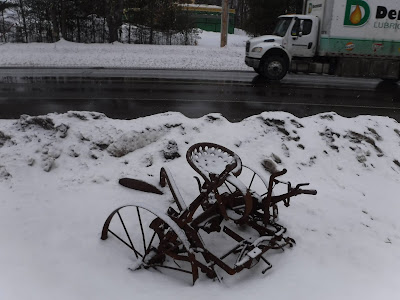 On the other hand, a practical and fiscally conservative Yankee farmer might think a light brushing to dust off the snow, a little WD-40, hitch it up to a horse, and you are ready to ride. As the poet James Hearst wrote in Country Men, "the plow is roused from rusty sleep."

This is a horse drawn sulky plow, one of the first implements that would have been used in the spring during the late nineteenth and early twentieth centuries. For more on this specific plow see our previous blog here.

Taken together with other roadside attractions, you can find a veritable encyclopedia of historic spring farm tools. Mix with a few White Mountain artworks, sprinkle in a little history, and a dash of hands-on farming experience and you can use these tools to explore stories of the ravages of Civil War, tragic demographic disruption, dramatic shifts in technology and the relationship between environmental and architectural continuity and change. 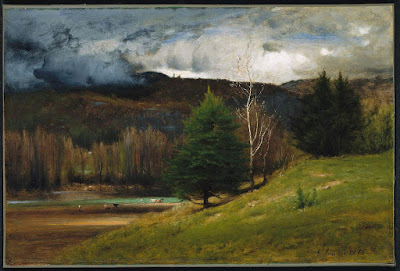 I love to look at paintings of national significance that feature local places. This is a view of Humphrey's Ledge looking across the Saco River from near Kearsarge Village by George Inness. You can read more about it at the Museum of Fine Arts, Boston here.

You can see a similar view today from the Intervale Scenic Vista see the map here.

The MFA credits John J. Henderson and Roger Belson, who run the website White Mountain Art, for help in identifying the location of the view.

While a perfectly valid, enjoyable and rewarding approach to the study of art, the MFA's description  of the artwork focuses mostly on the artist's style and use of color. It tells of the influence of the French Barbizon school on his brushwork, his use of blue and green, and his depiction of atmospheric phenomenon.

However, it does not address the obvious issue of what is actually going on in the image. Let's look more closely at that brilliant bit of green that leads your eye into the painting.

I would suggest that this is a scene of plowing and manuring a field with oxen. However, none of those words are included in the description on the website.  How can you talk about this painting without using those words? The use of oxen to pull plows is an ancient tradition... 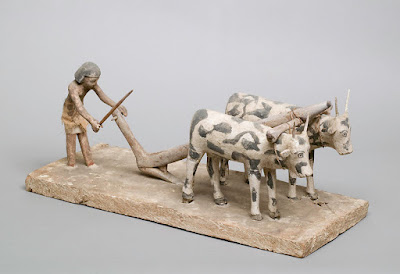 ...as seen in this small sculpture from the Metropolitan Museum of Art here.

The Eaton Poet sang the praises of oxen in his book Shepherd's Song. You can read it here.

Over the years, we have used Winslow Homer's artworks at various working farm museums to help us understand historic farming. Homer provides us with a number of period examples to illustrate a plow chronology. 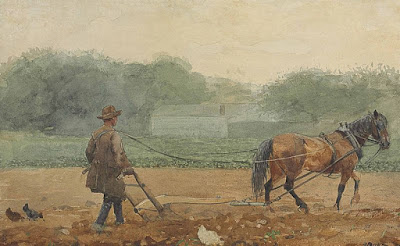 In this painting Homer depicts an early style wooden beam moldboard plow. You can read more about this image here and about that type of plow and how it relates to Thomas Jefferson here.

Before Jefferson's improvements to the plow the device did not change much from the time depicted in these two sculptures of guys and their plows. 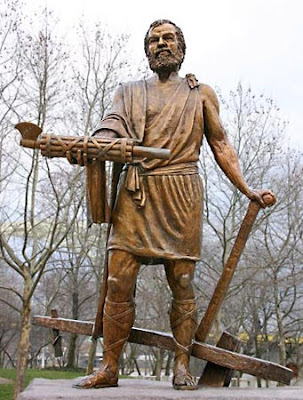 The one above in Cincinnati Ohio depicts an ancient Roman plow.

This one below in Concord Massachusetts depicts a very similar plow in 1775. 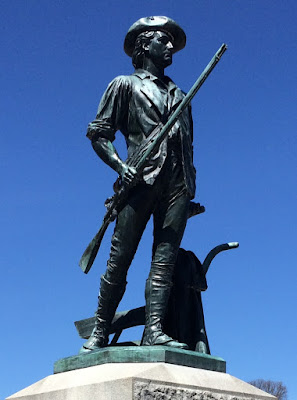 But these are just statues of guys with plows. There are deep and meaningful stories that go with the statues. There is even a significant relationship between the two sculptures even through they are 870 miles and a thousand years apart. If you can guess the secret contact me at the library and you can win a prize!

Below is a Homer painting showing a barefoot boy sitting on a new improved steel plow. 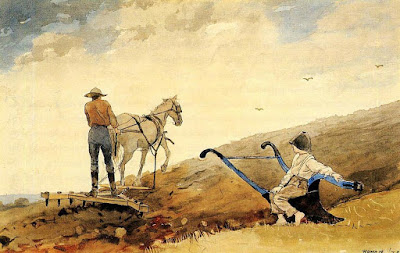 For more information about this type of plow and how it relates to John Deere follow this link here.

It is important to note that just because a new and improved type plow technology was available, not all farmer's switched to the most modern version. They were often used simultaneously from one neighbor to the next. Sometimes it was a question of economics. Some could not afford the new capital investment. Others might have had the cash, but did not see the upgrade as worth the cost. Some people believed that a steel plow poisoned the soil. A number of historians argue that the steel plow led to the dust bowl that helped lead to the Great Depression.

I believe that art historians need a better working understanding of historic farming forensics to more fully understand art. For example, look at the controversy of another farming tool in a Homer painting  here and mistaken reading of crop types in art from our previous blog here.

It is important to understand that artworks are not always an exact depiction of a specific scene. You can see this in the variety of sketches now at the Cooper Hewitt Museum showing the thought and work that Winslow Homer went in to constructing his imagery.  He played around with different arrangements to explore different ideas. 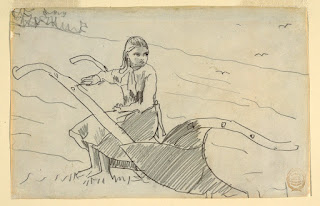 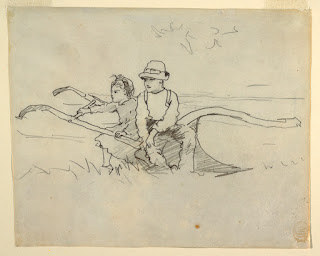 If you want one for yourself, the one below is available for sale here. 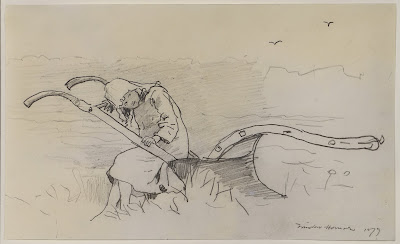 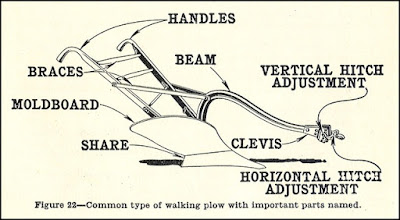 For those not familiar with plow anatomy, here is a helpful diagram.

Below are two different watercolors that Homer did to explore different aspects of light and color for a scene. 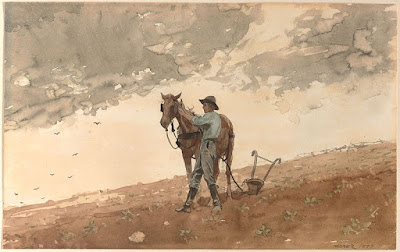 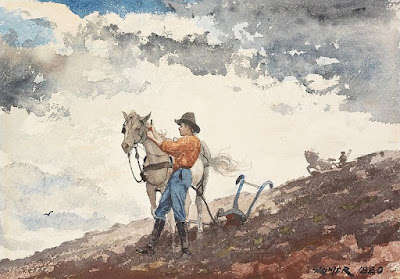 After plowing the field, the farmer would enrich the soil. Before modern fertilizers, this would mean manure. And our manure spreader is almost ready to be filled for action. 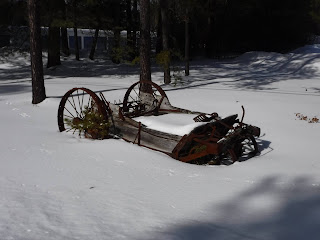 Here are several views of the business end of the manure spreader. 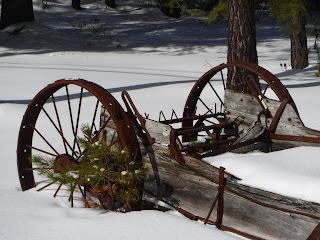 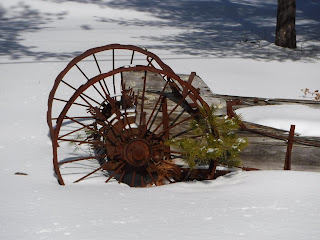 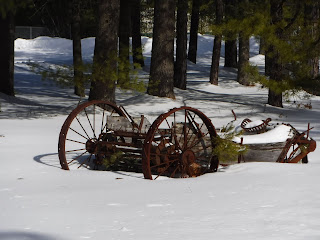 For more on the art of manure spreading see our previous blog here. Of course if you don't have a modern mechanized horse drawn manure spreader like the one above, you can still use an old fashioned ox powered dump cart like the one below and an pitchfork. 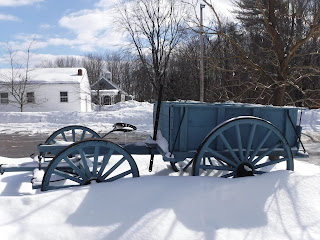 Like plows and manure spreaders, harrows changed over time. Even after more modern types of harrows had been developed, it was still common to see more rustic versions like this one in Winslow Homer's painting The Brush Harrow. 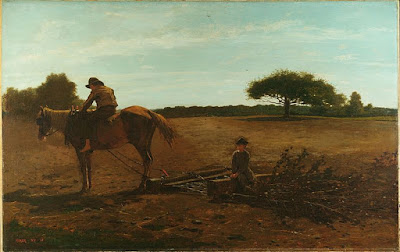 This painting is a good example of how a work of art can function on many multiple levels at the same time. This image can be seen both as window through which we peer at a simple historic farming scene, seemingly capturing a single moment in time as if caught by a casual candid photograph, and at the same time act as a mirror that reveals deeper layers of meaning from both that time, our time, and the changes between.

In writing about this painting in their book on Winslow Homer (available at the Conway Public Library), Cikovsky and Kelly conclude that "The Brush Harrow is perhaps the most tenderly sensitive and perceptive of all of Homer's paintings of the Civil War."

Civil War? How did we make the imaginative leap from that painting to the Civil War?

This interpretation of this farming painting as expressing issues about the Civil War is also seen on the gallery text website for this painting at the Harvard Art Museum. You can read it here.

"In The Brush Harrow, one of Homer’s most sensitive and poignant post–Civil War paintings, two boys prepare a field for spring planting. Unlike other nineteenth-century genre scenes, which celebrate the whimsical spirit of childhood, this work has a tragic cast. The boys do the work of men in the absence of men. Indirectly acknowledging the carnage of the war, Homer implies that the older farmhands — the boys’ fathers, uncles, and older brothers — have not returned from the battlefield."

"At the end of the Civil War, Americans mourned the dead and at the same time looked forward to the nation’s economic, political, and spiritual rebirth. Invoking agrarian cycles and the promise of a new generation even as it acknowledges loss, The Brush Harrow perfectly captures the mixture of hope and sadness that defined the national psyche."
On another website, Harvard conservation fellow Anne Schaffer reveals that part of their interpretation has to do with the horse's hind end (which was recently cleaned up). 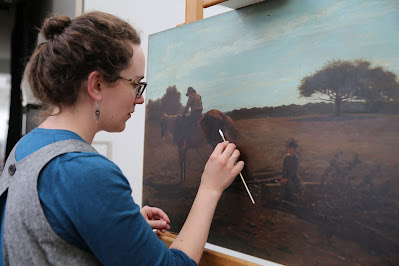 You can read about that here.

Wellesley art historian Rebecca Bedell adds to this interpretive narrative in her book Moved to Tears: Rethinking the Art of the Sentimental in the United States. Bedell's insightful analysis can be seen in this snippet view (pp. 113-116) here.  You can also get this book through the Conway Public Library's interlibrary loan system.  She suggests we “linger over the details and take in their meanings.”

She examines the flora to deduce the season. “The fully leafed-out trees and their slightly rusty tones suggest that the boys are coming very late to the task of spring planting, or, perhaps, that the scene represents not spring planting, but rather the early fall planting of winter wheat, which usually took place in September of early October.”

She suggests we consider this painting with Homer’s Veteran in a New Field (see our previous blog on that here). She points out they are the same size and format and were both created in the months immediately following Appomattox. “We might think of them as companion pieces, as a Reconstruction diptych.”

“The Brush Harrow represents a field to which no veteran has returned. More than 600,000 men, possibly as many as 750,000, died in the Civil War, at least one in five of those who served. Hundreds of thousands of families were shattered by the loss of husbands, fathers, sons, and brothers, and many of those families consequently slid into destitution. In The Brush Harrow, Homer follows the convulsive aftershocks of the war into the countryside, subtly and poignantly materializing the suffering endured far from the battlefield."

What is next for the future of agriculture? perhaps plowing by drone? or robot?  and what changes in art and landscape will we face?