A Dream-Picture from 150 years ago today

With all the buzz about the coming snow storm, I thought I would read up on the winter expedition of 1870-1871 in advance of Dr. Peter Crane's zoom program next week (click on images to enlarge them). 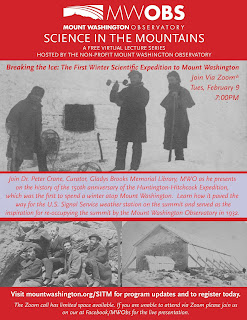 The expedition resulted in a number of published works including this book that we have at the Conway Public Library's Henney History Room. 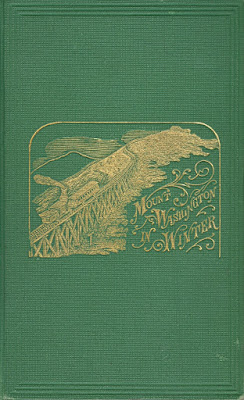 If tomorrow ends up being a snow day, you can read the the book online through this link.

Part of the story is written in a diary-like format and it is to the entry for February 1, 1871 (found on pages 179-180) that we now draw our attention. Here are the relevant pages. 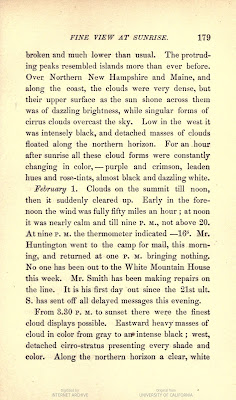 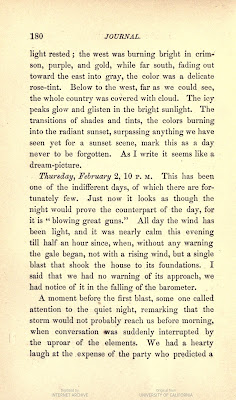 The text begins rather pithy and prosaic (wind speed, thermometer readings, etc.) but then rises poetically to the sublime describing the sunset and ending with "... mark this as a day never to be forgotten. As I write it seems like a dream-picture."

Note that February 2 by contrast was one of those "indifferent days."

One of the aspects of this book and early science in general that attracts me is the way in which they combined art and science. In that respect, this work does not disappoint.

As the saying goes "from the sublime to the ridiculous." There is also a lot of silly humor added into the book. Starting on page 351 there is a parody of the antics of "The Mad Mount Washington Philosophers" and their experiments at the summit with whiskey, water, cigars, and lemon.

We will have more on this expedition in future blogs.