... while the sun still shines. It's about time and timing. 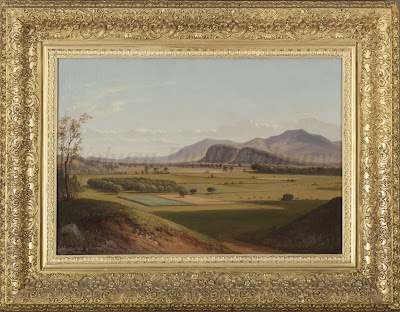 It is with deep appreciation to Tom Doyle, Archivist, Dr. Thomas J. Glennon Archives and the Trustees of the Woburn Public Library, Woburn MA for allowing us to use this image (see this link).


... and time is running out for summer. While subtle, there are signs that summer is starting to fade. Metaphorically, the shadow of autumn is creeping in from the right of this painting. Note the tree at the left showing just a tinge of fall color (click on images to enlarge them).

We can notice the change of seasons first in small patches in environmentally stressed areas such as this where erosion allows nutrients to leach out of this naturally thin and rocky soil depicted so well here by Benjamin Champney. This area has been additionally impacted by a dugway road that leads down into the more fertile intervale. Now we are seeing bits of fall color around the edges of the swamps and this will soon progress into our annual full blown magnificent crown of purple, red, yellow and gold.

Note also the hints of the now blooming goldenrod at the bottom corners of the painting. Plant identification can be a useful forensic tool for art historians to trace time. You may also enjoy the seasonally specific flowers of mullein and clover in Albert Bierstadt's Moat Mountain, Intervale, New Hampshire, c. 1862 at the Currier Museum (see this link). This is a great painting to compare to Champney's Intervale above and to a photo by the Bierstadt brothers at the Currier as well here.

Telling time can be challenging. The almanac tells us that there are 38 days until autumn begins. New Hampshire played a key role in publishing almanacs (The Old Farmer's Almanac in Dublin and Dudley Leavitt in Meredith). According to archaeoastronomy these almanacs played the same function as Stonehenge, New Grange, Mayan temples and the Pyramids. They told us when to plant and when to pick, the phases of the moon, and when to celebrate the seasons. Paper replaced stone and now you can get all this information on your phone.

While the sun and stars tell us one thing, television tells us something different. Astronomically summer started in June and continues into September. However, television commercials tell us summer is over by marketing back to school sales and fall fashions. It won't be long before we see displays for Halloween in the stores. The tourist chamber promotes summer from Memorial Day in May through Labor Day. Which drum do we march to? Money or the stars?

Much of our philosophical and religious ideas about eternity may come from the cyclical nature of farming - seeds to flower to fruit to seed again. For farmers in the Mount Washington Valley this was, and is, time for rowen. This is the second cut or second crop of hay in one season.

Now that we have looked at nature and time, and the nature of time, let's look at technology and evolution.

We introduced windrows in a previous blog here. We looked at each step of horse powered haying. Now we are harkening back to an earlier phase. This painting offers an encyclopedic look at hand powered hay techniques.

The closest you can easily get to this view today (without trespassing) is from the Intervale Scenic Vista. See this map and this street view here showing the matching profile of the mountains. However, since most haying has stopped in the fields, the trees have grown up and you can't see the fields as well today.

Here is a detail from this painting (click on images to enlarge them).

This small detail of the small painting (18 1/4 x 26 1/4 inches) depicts four hay wagons and twenty people working in the fields. When we arrive on the scene, the hay has already been cut and dried and raked into windrows (more on cutting hay later in a future blog).

Towards the left you can see two men using hay rakes to pile up the windrows into rounded domes called hay cocks.

Notice the hay cocks are about knee high and the hay is green. These tips will come in handy later when we explore harvesting of other crops in a future blog.

In another section of the painting to the right six men work around an empty wagon. The wagon tongue points to the right and the oxen are to the left. Perhaps they are tethered or hobbled so they can graze while waiting to work. 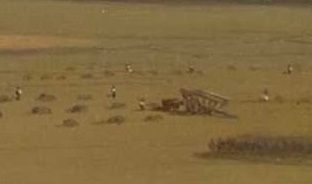 On the right foreground at the edge of the shadow you can see a team of three men working around a hay wagon and a fourth raking up the last of a windrow.

The person by the hay cock is using a pitchfork to throw a "jag" of loose hay to the top of the wagon where another person carefully loads it. It was a real art to load a wagon.

In the front a teamster uses voice commands and a goad to work the oxen when needed. Oxen were more common during this time than horses.

Other than the oxen, all the work here was done with manpower. As time went on manpower was replaced by horse powered machines and then by today's tractor powered equipment. While the power source and tools changed, haying is still the same process.

I leave you with this mysterious painting by Winslow Homer intriguing title Veteran in a New Field. 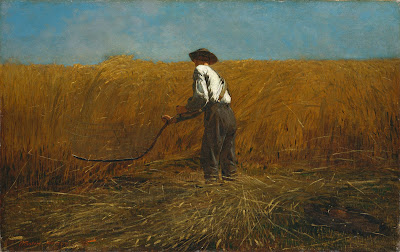 We will look at the controversy over the thing he is holding in his hand that has raged in art history circles since it was painted in 1865. Start preparing our next lesson by reading at this link.

For more details on this or any other historical subject in the White Mountains, contact us at the Conway Public Library's Henney History Room.
Posted by Mount Washington Valley History at 4:42 PM