In New England, local native sweet corn is a midsummer harvest that just recently showed up at our roadside markets. But this fresh corn only lasts for a few weeks or so when it matures without freezing or refrigeration. How was this summer bounty preserved in the past? 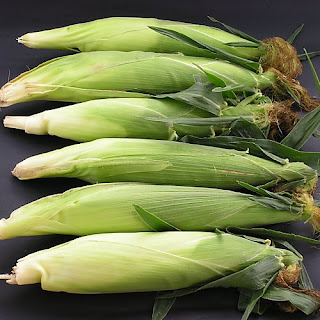 One answer was to "can" it. The idea of canning food started with stoneware crocks. 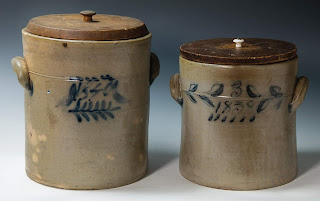 The idea was to try to get the food items hermetically sealed. For an interesting tangent on the mystical linguistic origins of that term see this link here. 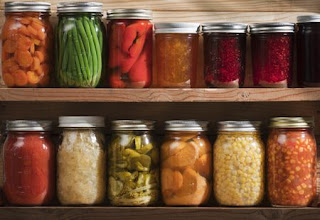 Tin was another option for canning corn. More on this later. 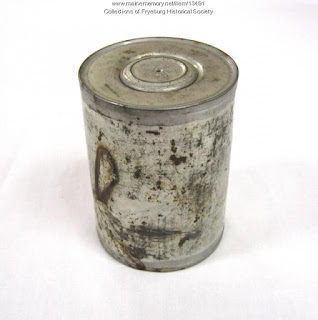 Did you know that Conway once had a factory for canning corn? (click on images to enlarge them). 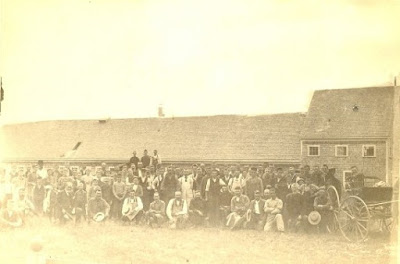 This photo from the collection of the Conway Public Library's Henney History Room shows the building with the workers posing outside. According to David Emerson's book The Conways p. 59, it was owned by the Baxters of Portland, Maine. The Corn Shop was a seasonal industry employing many of the village young people. The photo reveals the age and gender diversity for this important industry. At first, the corn was husked by hand, later the factory became automated. The building was later sold to Fred Merrow and Walter Burnell to house a wood-turning business.

Notice that the two story section seen in the photo above is seen on the north side of the building in the print below. The Sanborn insurance maps further below indicate that this section of the building was the soldering room for tin cans and that it had a slate or tin roof while much of the rest of it was wood shingle or composition materials at that time.

You can see an illustration of the Corn Factory listed as number 30 (H.C. Baxter & Bro., Canning Factory) on Conway's 1896 Bird's Eye View. Come to the library to see if you can find it on the original. 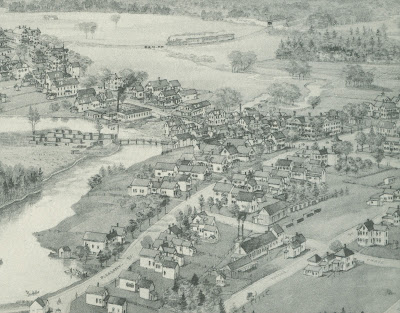 The view shows it had a pair of chimneys belching out black smoke.You can see smokestacks throughout Conway Village. During the period they were considered symbols of progress and prosperity, not the pollution we would associate with them today.

Here is a closer view of that building complex. 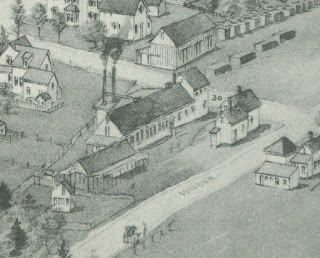 According to Hounsell's history of Conway it only operated for a short time each year. The community pitched in and it was both a social event and a way to earn hard cash. Our digitized copies of the Reporter Newspaper have many references to all the gossip and goings on at the area corn shops. You can search for all the news at our website here.

The workers started out young and stayed at it. Fred Lucy worked there as a teamster driving horses at age four bringing the freshly harvested corn from the fields to the corn factory. Jonathan Emery husked at eighty-three years old. The Reporter relates that "His smiling face is seen in the husking yard almost every day, husking corn as accurate as the young ones. He is very genial and has a kind word for every one."

As can be gathered from various sources, the greatest number of people were needed to husk the corn by hand. Arthur Hill started husking at age twelve.

As time changed all but the husking became mechanized. Here is a detailed description of the process from Hounsell at that time.

After husking the corn on the cob was carried on a belt to the top of a chute, where two men pushed it down into the cutting machines with paddles. Six women were needed at the cutting machines. The cobs were inserted small end first, in order to remove more of the corn from the cob. The cobs were carried off via a belt and dumped into a huge pile. The corn went from the cutter to a sieve where is was shaken so that bits of husks were removed. The corn was fed into a mixer, where it was combined with sugar, water and salt until creamy. Next it went to the cooker to cook for a few minutes. Cans came from a chute on the upper floor and were filled at the rate of a hundred per minute.

The cans were then carried on a run to a sealing or capping machine. Having been sealed, the went to a table where a man with a large strap secured then into pans that were loaded on small trucks and taken into the "retort room," where they were cooked at a high temperature. After this, the produce was cooled under a spray of water on a platform. Women inspected the cans, then the other workers sat at a table affixing labels to them. Once boxed, the cans of locally grown and packaged corn were ready for shipment. Shipment to where? Somewhere in New England, one might suppose, but instead, they were bound for the Pacific Coast for voyages to China and Japan as well as Liverpool and London, among other foreign markets.

Perhaps the most important person in the shop was the "syrup man." According to Steve Smith in his article "Corn Shop Days Remembered" from The Reporter, January 20, 1988, pp. 1-2, the role of the syrup man was to get the right mix of ingredients so the canned corn would taste right. It took some finesse and flexibility. This happened in the "mixing room where the golden kernels were blended with the proper balance of water, sugar and salt under the watchful eye of the "syrup man." The formula had to be changed depending on how hard the corn was when it was cut off the cob."

His informant, Arthur Hill recalled that "in the 1930's one of his jobs at the shop was relaying this vital information to the syrup man and sealing machine operator so the formula could be altered and the grading codes changed on the cans."

A detail of Conway's 1908 Sanborn insurance map shows all the buildings of the Conway corn factory were made of wood (represented by yellow in the map) and uses a dashed line to trace out the outline of the open air husking shed.

A variety of Sanborn maps at the Conway Public Library's Henney History Room reveal more details and documents the changes from 1908 to 1923 and 1929. These maps provide an interesting "accidental" source of history.

These maps were intended to furnish insurance agents with details to help figure fire risk such as night watchman during the season, the lights lit by coal oil, and fire buckets distributed throughout. The map indicates that the heat and power was provided by an eight horsepower steam engine. The furnace was fueled by wood and there was a one hundred gallon gasoline tank buried eight feet under the ground as well. A key was included for numbers and symbols that indicated the details such as the material used to roof the buildings.

According to the book Canning Gold: Northern New England's Sweet Corn Industry: A Historical Geography (from whence I take the title of this blog) there were four towns in New Hampshire that had corn shops while Maine had 121, many built by the same company. So we can see more of what our corn shop may have looked like from the Maine Memory Network website.

They show the same kind of open sided shed seen in the illustration above and the map below. 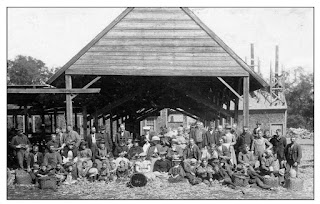 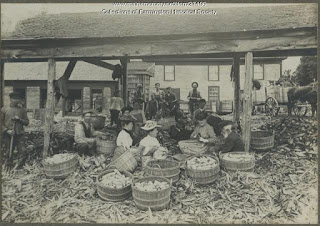 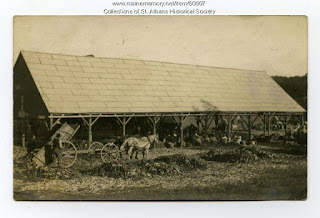 After the corn had been shucked it had to be shelled. A number of specialized knives were developed to perform this task. 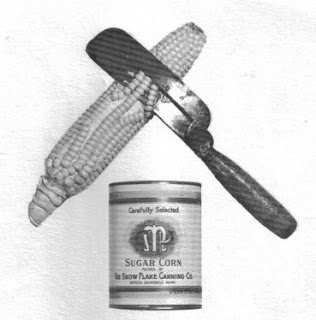 The knives pictured below are particularly interesting in that these were exhibited in the Circuit Court case John Winslow Jones versus Henry Clark, April 1872. See Maine District Circuit Court 1872. The case is about patent infringement on the design of these tools. 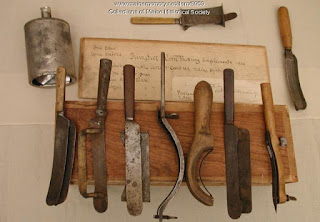 For more details on this or any other historical subject in the White Mountains, contact us at the Conway Public Library's Henney History Room.
Posted by Mount Washington Valley History at 6:04 PM