One Hundred Years Ago March 1917 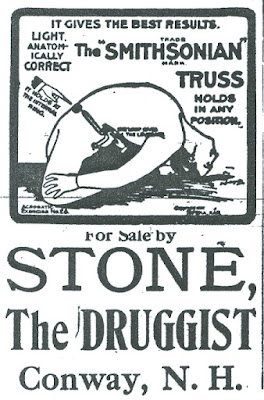 This ad for the “Smithsonian Truss” appeared throughout the month of March one hundred years ago. Used in the treatment of hernias, it was available for sale at Stone the Druggist, located across from Kennett High School. While the Food and Drug Act had been instituted eleven years before, the Reporter newspaper published a wide number of ads for kidney pills, worm pills, and various other remedies that were basically “snake oil” medicines.

Some of the local news that later had an important international impact included an interesting article about a tour of the White Mountains with dog teams. The Great Chinook, lead dog for Byrd’s expedition to the South Pole twelve years later, was born January 17, 1917 and would not have been ready to pull in March. Chinooks are now New Hampshire’s State dog. 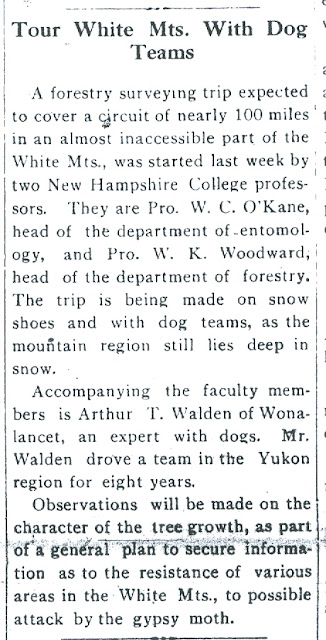 One interesting notice brings to mind, an important, now obsolete job, when all the movies were silent “Miss Hazel Justason has been engaged by the motion picture house at Brownfield, and furnishes the music every Saturday evening.”

Other local news included, “Dr. Wiggin returned Saturday from Boston. We understand that Chester has a new auto” and “Conway Electric Light and Power Company have about completed the change in the street wires made necessary by the extension of the system to Chocorua.”

There was still very little reporting about the war raging in Europe. There were no reports on key battles in Baghdad, Samarrah, and Gaza that occurred this month one hundred years ago.


There was however, a strongly worded editorial about the famous “Zimmerman telegraph” that had been sent on January 16.


Between 1914 and the spring of 1917, the European nations engaged in a conflict that became known as World War I. While armies moved across the face of Europe, the United States remained neutral. In 1916 Woodrow Wilson was elected President for a second term, largely because of the slogan "He kept us out of war." Events in early 1917 would change that hope. In frustration over the effective British naval blockade, in February Germany broke its pledge to limit submarine warfare. In response to the breaking of the Sussex pledge, the United States severed diplomatic relations with Germany.

In January of 1917, British cryptographers deciphered a telegram from German Foreign Minister Arthur Zimmermann to the German Minister to Mexico, von Eckhardt, offering United States territory to Mexico in return for joining the German cause. This message helped draw the United States into the war and thus changed the course of history. The telegram had such an impact on American opinion that, according to David Kahn, author of The Codebreakers, "No other single cryptanalysis has had such enormous consequences." It is his opinion that "never before or since has so much turned upon the solution of a secret message." In an effort to protect their intelligence from detection and to capitalize on growing anti-German sentiment in the United States, the British waited until February 24 to present the telegram to Woodrow Wilson. The American press published news of the telegram on March 1. On April 6, 1917, the United States Congress formally declared war on Germany and its allies.

On March 15 In Russian Czar Nicholas II abdicated his throne. On March 22 the following was included in the editorial column”


The world has made history fast the past week. The revolution in Russia, changing a dynasty of over 300 years existence to practically a republic was done in the twinkling of an eye, so to speak, and that without any bloodshed practically. It is a dream long held by the mass of the Russian poulace come true.

And it is a conceded fact that if the people had had the reigns of government the past ten years or more in some of those central European countries there would have been no such barbarous war as the one now being waged. Germany is trembling in the balance lest the Russian revolution spread to the Kaiser’s domain. Let is come - the sooner the better. And when it does come the end of the war will come quick.

This kind of attitude lead to the passing of the so called "military bill." 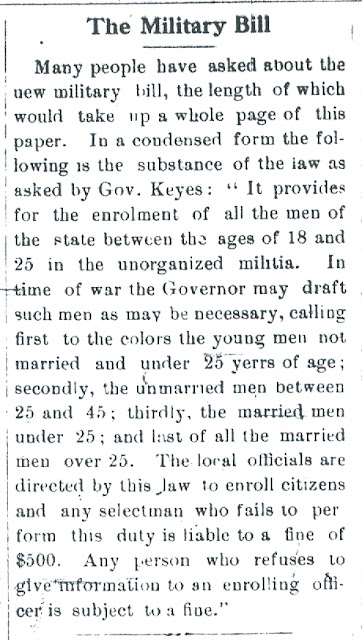 https://www.archives.gov/research/military/ww1/draft-registration
On May 18, 1917, the Selective Service Act was passed authorizing the President to increase temporarily the military establishment of the United States. The Selective Service System, under the office of the Provost Marshal General, was responsible for the process of selecting men for induction into the military service, from the initial registration to the actual delivery of men to military training camps.

The information included on each registration differs somewhat but the general information shown includes order and serial numbers (assigned by the Selective Service System), full name, date and place of birth, race, citizenship, occupation, personal description, and signature.
The registration cards consist of approximately 24,000,000 cards of men who registered for the draft, (about 23% of the population in 1918). It is important to note that not all of the men who registered for the draft actually served in the military and not all men who served in the military registered for the draft. Moreover these are not military service records. They end when an individual reports to the army training camp. They contain no information about an individual's military service.
After the signing of the armistice of November 11, 1918, the activities of the Selective Service System were rapidly curtailed. On March 31, 1919, all local, district, and medical advisory boards were closed, and on May 21, 1919, the last state headquarters closed operations. The Provost Marshal General was relieved from duty on July 15, 1919, thereby finally terminating the activities of the Selective Service System of World War I.
The records are arranged alphabetically by state, including Alaska, Hawaii, Puerto Rico, and the District of Columbia; there under, alphabetically by county or city (except for Connecticut, Massachusetts, and Rhode Island which are arranged by divisions and counties); there under alphabetically by the name of the registrant.
In rural areas one should be able to find a registrant's card knowing his name and the county in which he registered. In large cities and in some larger counties the search could be more difficult. In New York City, for instance, there were 189 local boards.
Related records include Classification Lists of Docket Books maintained by local boards to show the process of classification, physical examination, claim for exemption or discharge from the draft, and the appeals process for each registrant. Each local board also maintained lists of men ordered to report to the board for induction. These show (for each individual ordered to report) name, the mobilization camp to which he was to report and the date he was to report, and the certification of officials of the mobilization camp that the man had (or had not) reported as ordered. These records are in the Field Archives branches in the appropriate regions.
There are also records of the appeals process, and records relating to American registrants living abroad and aliens living in the United States.

Many of these records can now be accessed through the Conway Public Library's subscription to Ancestry Plus and we are happy to help guide you through the research process for you to discover your own World War One ancestors.