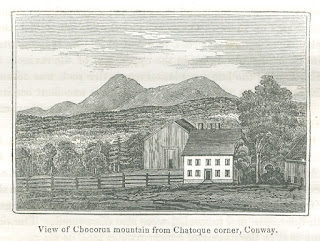 In an earlier blog, I suggested that the building seen in this woodcut “View of Chocorua mountain from Chatoque corner, Conway” looks a lot like the current White Mountains Hostel on Washington Street not far from the Conway Public Library.

The print was published in Charles Thomas Jackson’s 1844 book on New Hampshire Geology.
Below is a photograph of the White Mountains Hostel I took recently. 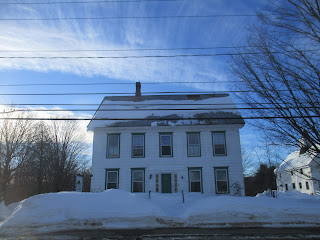 If you look closely at the area then known as Chatoque corner in Conway on a map and try to line up the geographical features in the background of the print, that leads you to this spot.
One of the things that struck me about the woodcut was the curious case of the triple chimneys seen in the print (you can click on the images to enlarge them).


This possible clue led me in two different directions, first back into the recesses of our archives and secondly back out into the field.

On display near the circulation desk of the Conway Public Library can be found an 1896 Bird’s Eye View of Conway. 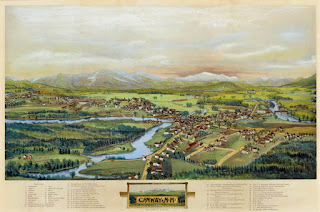 If you look at the area on the view where the line of sight would be you can in fact find only one building that faces the street at the same direction and according to this print did indeed have three or even four tall narrow chimneys.

At this level you can see Washington Street in relation to the covered bridges, both of which remain to this day. 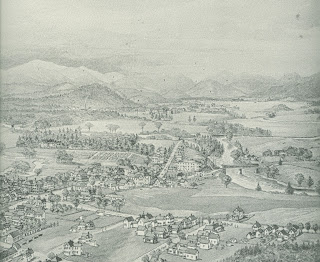 At this level you can see more of the architectural details of the buildings on the street. 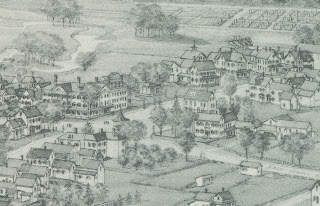 You may notice that most of the other buildings in that area could be eliminated as their gable end instead of their eaves side face the street. Let’s zoom in to different points.

Notice the “connected buildings” on the bird’s eye view where the main house is connected to an ell and then to the barn. Thomas Hubka wrote a great book we have here at the library about this phenomenon called “Big House, Little House, Back House, Barn. He maps out this 19th century architectural process and explains that is limited to a small area in New England, including Conway.

Hubka will be offering a series of lecture programs in the area later this year thanks to the New Hampshire Humanities Program. 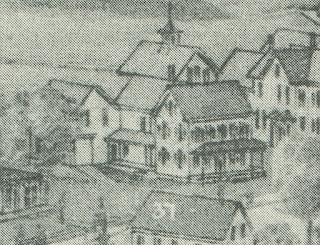 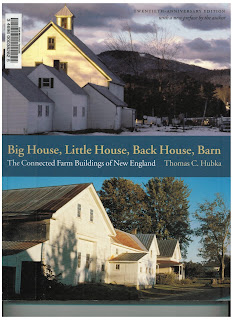 Another great resource for understanding historic buildings is James Garvin’s book, “A Building History of Northern New England” and the many reports on his website.

Hubka and Garvin describe the changes over time of both style and technology that would help solve our mystery of the curious case of the missing chimneys and the migrating barn.
A close look at the roof suggests there may have been two or even three chimneys here. 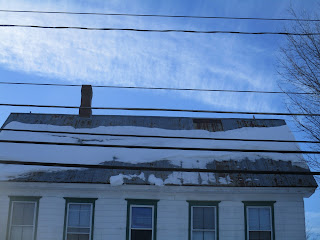