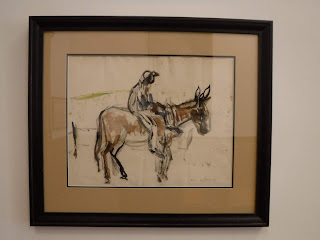 ... with apologies to Zora.

It was cleaned by paper conservator Marnie Cobbs and archivally framed by Louise Perry of Vintage Frames.

The untitled watercolor painting was discovered recently in the attic of the library by the library Director, David Smolen. It is probable that it was donated by Keith and Nella Henney, founders of the Conway Public Library’s Henney History Room. Nella’s journal, now published as Summers on Foss, indicates that they knew each other. Nella was also from the south and shared many of Goldthwaite’s interests and concerns.

The painting was done with wide, loose brush strokes and accents in a variety of colors. While she moved in the circles of abstract modern art and artists and lived in New York City much of her life, she retained representational imagery in her work with a focus on southern rural life.

Mules and men were featured in a number of her works at museums across the country. 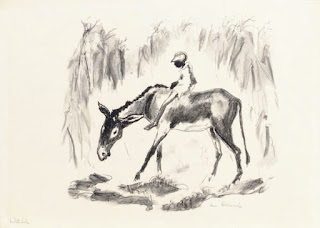 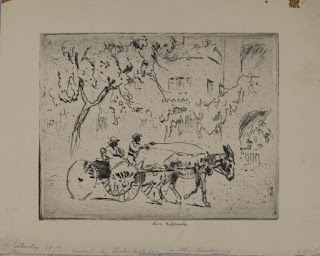 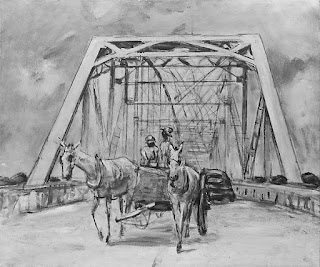 Mules have traditionally been preferred over horses and oxen in the south. Mules are hybrids, the offspring of a mare (female horse) and a jack (male donkey). The reverse is called a hinny (the offspring of a male horse and a female donkey). Although mules have gender (males are called “horse mules” and females “mare mules”), they are sterile and cannot reproduce because their parents have a different number of chromosomes (donkeys have 62 chromosomes, horses have 64).

For centuries mules have been prized for their intelligence and capacity for work. Farmers in the south typically preferred mules to horses because mules usually lived longer, ate less, learned faster, and were better tempered than horses.

Today mules are usually divided into two types: “draft mules” and “saddle mules” (there used to be more categories like “sugar mule,” “cotton mule,” etc., but these names disappeared after the early part of the 20th century). Most people now identify a mule by the mother, i.e: “Quarter horse mule,” "Tennessee Walking mule,” “Percheron mule,” etc. 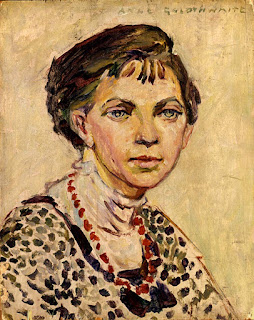 The course, block printed, all capital, signature on our painting is similar to that on the top right of a self-portrait at the Smithsonian and other works that can be found online.

Anne was a painter, print maker, teacher and advocate of women’s rights and civil rights. She was born in Montgomery, Alabama on June 28, 1869. She never married, but was engaged. Legend suggest that her fiancé was killed in a duel.

While visiting her in Montgomery, her uncle Henry Goldthwaite was so impressed by her drawing and painting skills that he offered to support her financially for up to ten years if she relocated to New York City to study art. She soon enrolled at the National Academy of Design where she studied etching with Charles Mielatz and painting with Walter Shirlaw.

In 1906, Anne Goldthwaite traveled to Paris to explore her interest in the early modern painting styles of Fauvism and Cubism. While sketching one day in Luxembourg Gardens she met American writer Gertrude Stein. Stein invited Goldthwaite to visit her apartment, yet she hesitated due to Stein's shabby appearance. After visiting Stein's home, Goldthwaite was immediately impressed by the extensive collection of contemporary paintings which hung on the walls of Stein's apartment. The chance meeting of one of the most influential pre-war and avant-garde persons of the time provided Goldthwaite with an opportunity to join the art circle of Henri Matisse and Pablo Picasso.

Goldthwaite later said, "Fate gave me several years in Paris at the most exciting time: during the great reconstruction from art to modern art." After drifting from studio to studio in an attempt to find the right teacher, she joined a small group of young artists called Academie Moderne. They held an exhibition each spring and their work was periodically critiqued by Charles Guerin, a disciple of Cezanne.

In 1913, Goldthwaite's oil painting, The House on the Hill was included in the famed Armory Show in New York, NY. 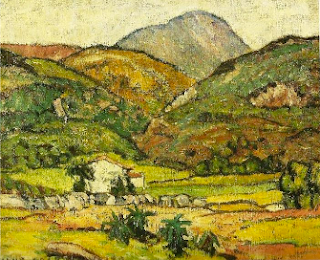 Goldthwaite passed away on January 29, 1944, in New York City at the age of 74. She was buried in Oakwood Cemetery in Montgomery, Alabama.