This portrait of Fanny Abbott hangs at the Conway Public Library. 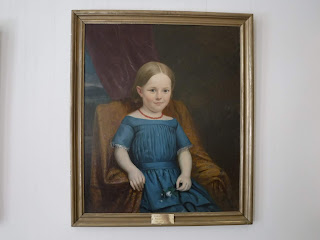 A brass plaque attached to the frame indicates it was "presented by William Chase." Notice on the plaque her last name is spelled with only one "T." In most other cases it is spelled with two Ts. 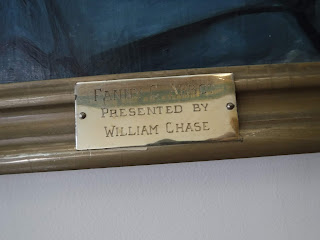 In her left hand she holds a couple flowers indicating the portrait represents Spring. 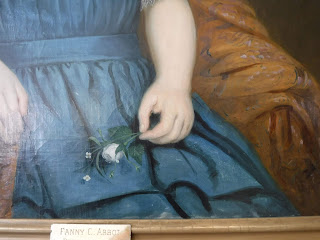 Her hair is cut in the style that young people wore it around the middle of the nineteenth century. 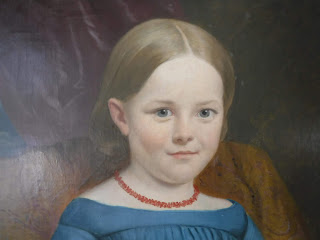 The 1850 US Census (available through the Conway Public Library's subscription to the Ancestry database) lists her at 2 years old and indicates that she was born about 1848 in Conway. She lived with her father Hiram C. Abbott, mother Laura A. Abbott and ten month old sister Ann M. Abbott. Her father was listed as a merchant.

Our 1860 map shows the location of their house and store next door to the west - look for the name H.C. Abbott near the four corner intersection (click on image to enlarge it). 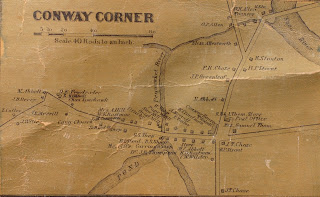 The pink necklace around her neck was probably made of coral. Since ancient Roman times, coral has been thought to protect children against danger. 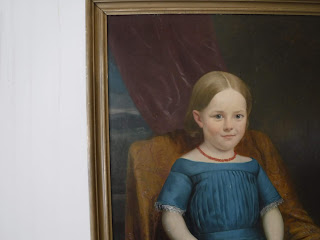 Over her right shoulder a purple velvet curtain has been drawn back to reveal the landscape outside the window. While the scene cannot be precisely identified, it certainly has the appearance of Conway's combined agricultural and industrial landscape with its low lying surrounding hills. This landscape can be seen in a number of images around the library including the ones discussed in previous blogs here and here.

The 1850 US Census noted above indicates that her neighbors were listed as "mechanic" or "merchant" or "farmers." One neighbor was listed as a "harness maker."

The arm chair she is sitting in is draped over with a a decorative fabric with the floral design and colors known as palampore usually from India. 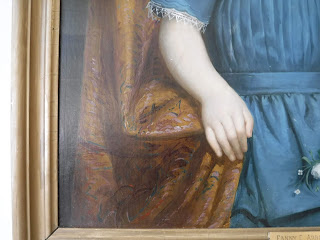 Her pleated dress has sleeves finished with tatted lace edging. 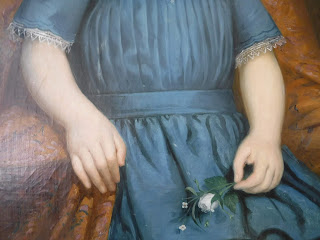 Throughout this month we will explore the archives of the Conway Public Library's Henney History Room to bring more about women's history out from the shadows.

Posted by Mount Washington Valley History at 10:39 AM