There is a "big night" coming soon! 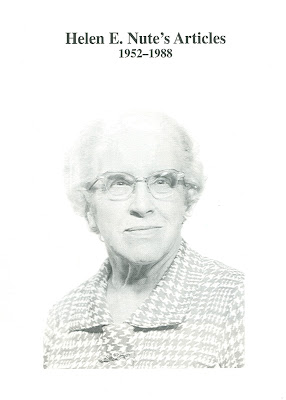 Literally, it is called “Big Night” and at its nexus is an interesting connection between art, history, nature and folklore. Let's start with the collected newspaper columns of Helen Elizabeth Nute, a remarkable historian whose life we celebrate as part of March's Women's History Month. 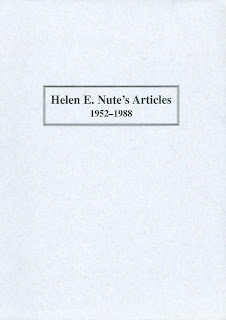 At 458 pages, covering the years 1952 - 1988, this book in the Conway Public Library's Henney History Room covers hundreds of topics and is a real treasure trove.

David Emerson noted that “From her earliest years, Helen was destined for greatness. If not in anyone else’s mind, certainly in her own.” By 1927, she had earned a master’s degree from Harvard University.

She was a historian, journalist, political activist, feminist, naturalist, conservationist and spent twelve years as a library trustee. A 1980 article in The Irregular, The Mount Washington Valley News stated that Helen Nute is more than historian. Helen Nute is history.

While she made it clear she preferred being called “Miss Nute,” she wrote under the pen name Sally Mander, a word play on her real last name and the amphibian newt. Newts are actually a type of salamander.

Nute and Newt are homophones, two words that sound the same but have different spellings and meanings, like plane and plain and two and too and ant and aunt (pronounced like we do in the south, not the north).

The spotted newt (Notophthalmus viridescens) was designated as the official state amphibian of New Hampshire on April 18, 1985 after a two year effort by high school students and Goffstown science teacher Philip Browne. The Union Leader newspaper (April 25, 1985, p. 48) lists the newt as the "perfect symbol for ensuring ecology in New Hampshire as they exist predominantly in the rain and runoff sodden areas heavily affected by acid rain." 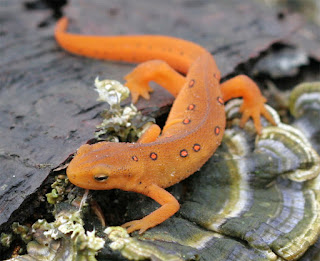 Helen was a true lover of nature and knowledge and she enjoyed the linguistic implications of Sally Mander and salamander. There is a lyric in the Genesis song Carpet Crawlers, “salamander scurries into flame to be destroyed...” According to folklore, salamanders have been tied to fire for centuries. Leonardo da Vinci wrote that the salamander "gets no food but from the fire, in which it constantly renews its scaly skin." This relationship to fire as well as the shape of a cooking tool used for browning or toasting food such as creme brulee or mac and cheese led to this item being called a salamander.

Over the years the logo for her column changed from a traditional ink well and quill pen ... 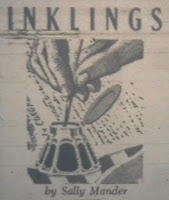 ...later it changed to a typewriter.

The column title "Inklings" has a couple potential meanings. On one hand it could be a noun and refer to a physically small inked or written bit, like a column or blog.It could also refer to a type of perception or understanding, such as clue, suspicion, hint, glimmer, or vague notion of an idea.


From 1943 to 1945, Helen Nute served in the Woman’s Army Corps as a clerk and educational reconditioning instructor in army hospitals. She raised to the rank of corporal.


She was the only female member of the local American Legion and in March 1980 she received a certificate of merit to express the  Legion's appreciation for her work in establishing the high school oratorical contest (click on image to enlarge and read the text). 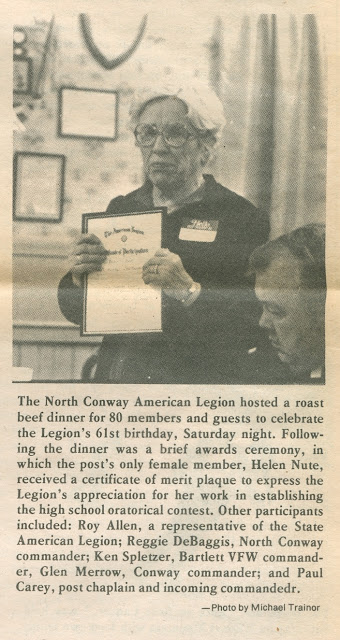 Her olive drab uniform, with it's somewhat enigmatic insignia, is now in the collection of the Conway Historical Society. 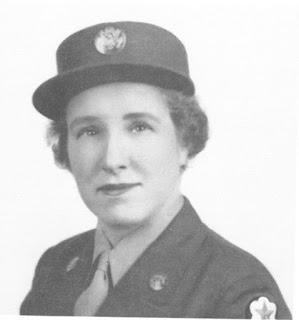 If you can read and interpret the emblems, ribbons, buttons and heraldry please contact us at the Conway Public Library's Henney History Room. 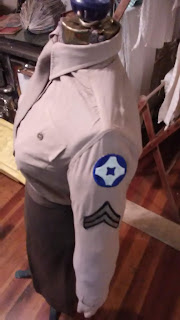 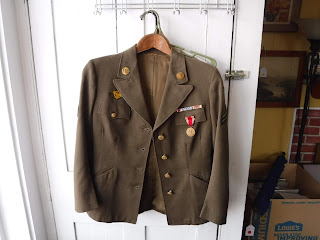 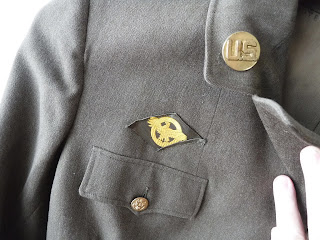 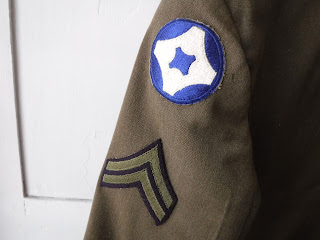 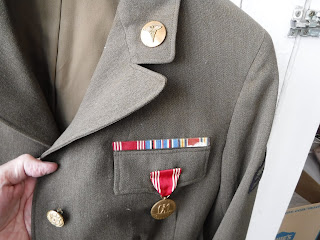 Part of the uniform includes a good conduct medal engraved on the back with her name. 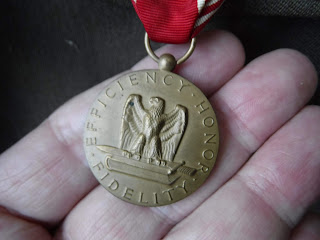 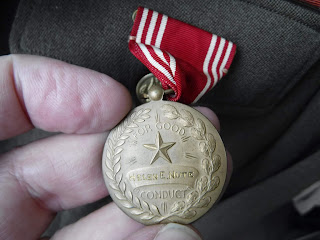 Now what is this about "Big Night" and what does have to do with Helen Nute?

Well it has to do with her interest in nature, especially amphibians, and it also has to do with mud, this will soon be mud season after all. By the way that is geological mud, not political mud  (or will it be both?)

Every spring, the first warm, rainy night facilitates a massive migration of frogs and salamanders leaving their winter hibernation grounds to mate and lay eggs. This is called Big Night. To learn more about this check out some of the books at the Conway Library and/or attend a program on Big Night at the Cook Memorial Library in Tamworth on Wednesday, March 20 at 7pm. Check out this link for details.

In another seasonally appropriate recollection, Miss Nute was famous for closing the annual Town Meeting for many years. She was known as a stickler for parliamentary rules and procedure and at the end of the meeting she was given the opportunity to stand up and pronounce “In the words of our forebears, I move to dissolve this body.”

If you stories you would be willing to share about the indomitable Miss Nute, or anything related to Conway history please consider sharing them during the filming of an upcoming NH PBS special on Conway Our Hometown. For more information see this previous blog or contact us at the Conway Public Library.