It is a Civil War era letter between two sisters. We are still trying to figure out all of the details but wanted to share it now. The letter is hand written on one piece of paper, stationary marked "U.S. Sanitary Commission."  (click on images to enlarge them) 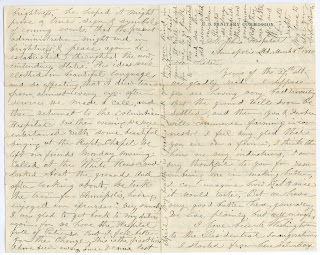 According to Wikipedia, the USSC was a private relief agency created by Federal legislation on June 18, 1861, to support sick and wounded soldiers of the Union Army during the Civil War. An interesting article about "Antiquarian Suppers" held to raise funds for the USSC in Bethel, Maine can be found at this link. 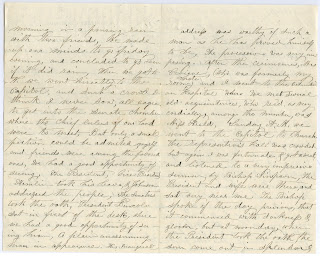 Let's look closer at the letter in the order it was written. It is a little hard to decipher all of the hand writing especially as end of the letter is written sideways over top of the start of the letter. 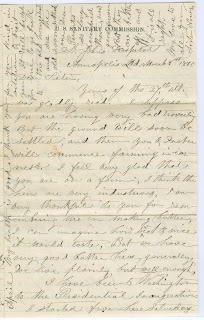 It starts with the address to which it was written "St. John's Hospital, Annapolis Md. March 8, 1865" and follows with "Dear Sister, Yours of the ..." acknowledging the previous letter, goes on about hens, making butter, etc.

Then it reads "I have been to Washington to the Presidential Inauguration." 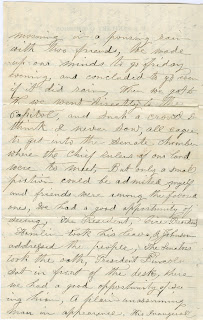 "When we got to W. (Washington) we went directly to the Capitol, and Such a crowd I think I never saw, all eager to get into the Senate Chamber where the chief rulers of our land were to meet."

"President Lincoln sat in front of the desk, where we had a good opportunity of seeing him, a plain unassuming main in appearance. His inaugural ..." 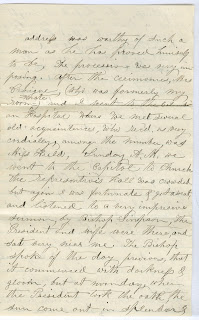 "... address was worthy of such a man as he has proved himself to be, The procession was very imposing.

The letter continues, "The Bishop spoke of the day previous, that is commenced with darkness and gloom, but at noon-day, when the President took the oath, the sun came out in splendor & brightness, he hoped it might prove a true sign, & symbol of coming events... 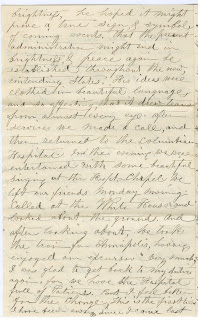 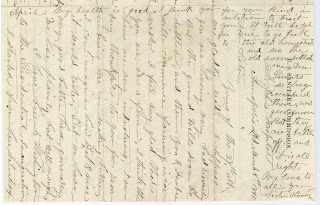 The letter ends with the salutation, "My love to all you, Sister Nancy"

You won't find this kind of documentation and commentary coming from today's twitter and facebook posts. You won't even have a physical piece of paper as evidence of history. My how times have changed.