We have the glasses and the party is two weeks from today! 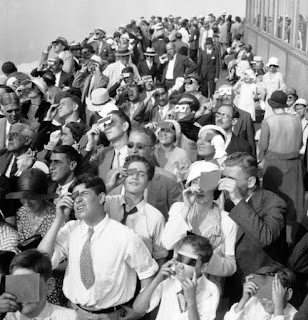 So come and join the crowd on Monday, August 21, 2017 at 5:30 pm. Watch the eclipse through special glasses provided, make an eclipse viewer, and decorate sun cookies!


All the cool astronomers will be there and it is going to be groovy. Let the Conway Public Library be your “one stop shop” for what you need to enjoy this event. In addition to the glasses and the party, we also have a telescope to study the sky (do not use that to look at the sun - more on practicing safe astronomy later). We also have many astronomy related books, dvds, downloadable books, audio tapes, and music recordings (including those mop tops who sang our blog’s title song).

Maybe, it is just “written in the stars.” Eighty-five years ago, Conway was at the center of a path of totality of a total eclipse of the sun.

If you want to prepare for this year’s solar eclipse you can see our small display near the library’s front entrance and learn more about it in our Henney History Room (click on images to enlarge them).

On August 31, 1932 the “totality” of the solar eclipse passed directly over Conway and special expeditions were made from The Franklin Institute and Wesleyan University’s Van Vleck Observatory. Over twenty other expeditions were made along this path in places ranging from South Portland, Maine to Magog, Quebec. 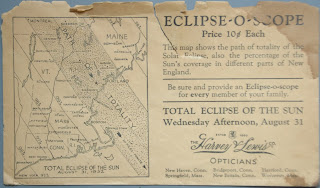 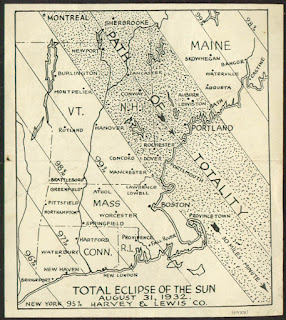 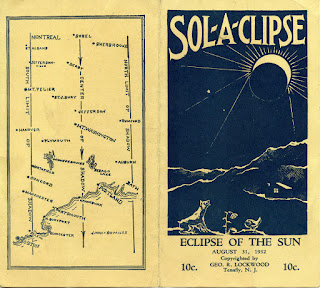 The Chamber of Commerce developed special promotional materials including stationary that had a watermark of a bird’s eye view of Conway village and envelopes with gold lettering on a black stripe that may have been meant to represented the path of the “totality.”

According to our Conway history (Hounsell and Horne, pp. 362-363) the eclipse led to the first, if somewhat informal, information booth in town  near the “four corners” near the library. In preparation for the anticipated visitors Conway boosters set up card tables, had a phone line tied in, and made reservations in private homes for travelers at just a dollar per person. The Paramount News Service covered the event, and locals rushed out to buy up all the crockery pitcher and bowl sets for miles around to furnish their rooms for visitors. The official observation headquarters was set up in the fields around what was then Kennett High School (now Kennett Middle School).

In our next blog, we will continue to explore more details about Conway and the solar eclipse. As always for more info, contact us at the Conway Public Library’s Henney History Room.

As John, Paul, George and Ringo used to say, keep looking up! 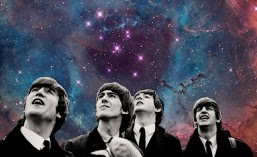