Ranco gets his deer November 1916

Our series of looking back at the news of one hundred years ago continues. This ad from November 23, 1916, captures a major theme on the town’s mind, deer hunting.

Some things never change. Over the past few weeks I have seen a number of deer and hunters going off into the woods. 100 years ago there was more news on deer hunting than on the war raging in Europe since July 28, 1914.

The only mention of the war I could find was about the lack of information the community was getting, in this case due to censorship. 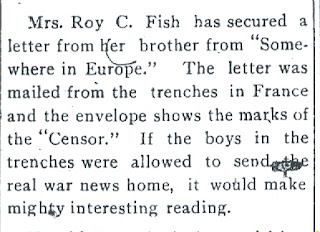 There was news however about cooking with electricity. 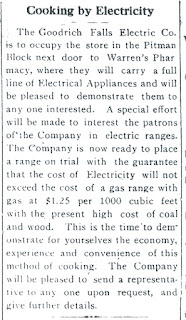 The article reads more like an ad and another issue of the paper in November 1916 did include a large ad with a picture of the most modern, up-to-date electrical stove. 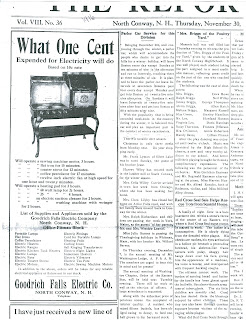 Thanksgiving and Christmas were featured in the paper. There was a “Thanksgiving Ball” at the Bijou (now the Glass Graphics building). Most music during the time was played live as “Victrolas” were a new thing. 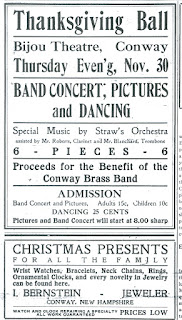 This notice about a price increase for ice shows that you could save money if you purchased your ice “on the pond.” A few years ago, Bud Shackford talked about cutting ice in Conway. 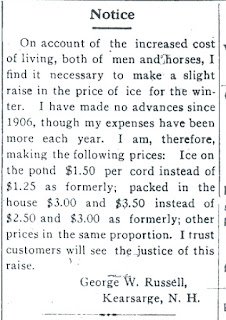 Back to hunting. The shoes described in this ad sound like the famous L.L. Bean shoe. 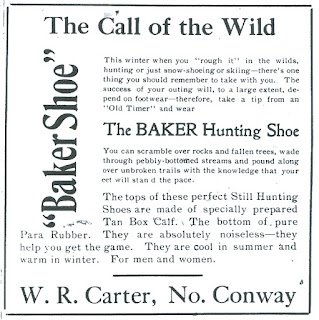 So possibly wearing their Baker hunting shoes from W.R. Carter and their rifles and ammo from A.D. Davis, George Ronco and Stewart Anderson each got a deer near the Mineral Springs.

They may have preserved their deer in ice from a pond in Conway and cooked it on an electric stove or oven.

Of course you can’t hunt there now, it’s now on the grounds of the “new” Kennett High School. The mineral springs has been preserved in large part by the relatives of George Ronco (now spelled Rancourt) and are open to the public.

The Rancourt’s service during World War One has been memorialized on a granite sundial in Redstone along with the other boys from that village. For a map and photo see this link.
Neither war nor deer season is without danger. 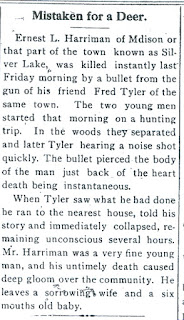 Be careful out there and wear orange during hunting season.