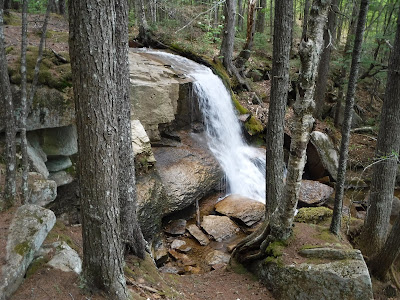 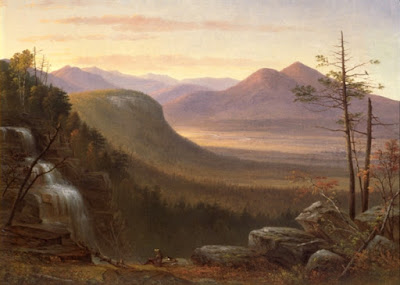 Do you think I found the right spot? We were led to "The Mysterious Thompson Falls" via an article in the Saturday morning paper by Ed Parsons (page 14a here).

So after a quick breakfast we set out to follow in Ed's footsteps.

It was a great hike. I only wish we had a dog like the man just left of the bottom center of the painting.

Ed was in turn inspired in part by Thomas Starr King. So in a way, this blog could be subtitled "Let Starr be your guide" following up on our recent blog titled "let the stars be your guide" here.

However others have directed folks to this site on the east side of Moat Mountain for over one hundred years. Starr followed Benjamin Champney and his "seven musketeers of the brush." They were in turn directed there by Kearsarge House owner Samuel W. Thompson.

A wider version of the waterfall during a wetter season more like the one in the painting was captured in a stereoview by Nathan W. Pease. Examples of this view can be found at the Museum of the White Mountains here and the Getty here.

Pease ran his photo studio, shop and a lending library from the building that is now Zeb's General Store in North Conway. Bob Duncan later ran his photo shop from the same building.  Below is an ad from the August 27, 1881 White Mountain Echo (p. 14). You can read more of this old news online here. 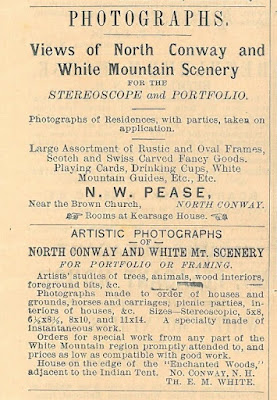 The White Mountain Art website also compares the Champney painting to his original sketch with its focus on Cathedral Ledge in the middle ground. 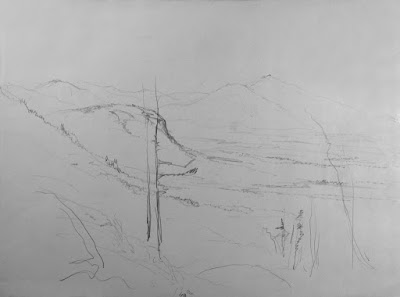 While the wide open view Champney enjoyed in the mid-nineteenth century is forested in today, you can enjoy a similar view if you follow the footsteps of Mountain Wanderer Map and Bookstore owner Steve Smith and hike up to a nearby peak where you can see this view of Cathedral Ledge, Carter Notch, Bartlett Mountain and Kearsarge Mountain.

See his photo below and his blog post from ten years ago here. 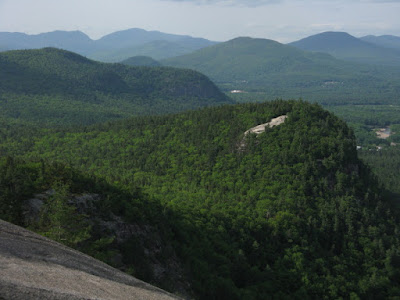 John Compton's 1happyhiker blog photo below reveals a similar vista from a nearby peak. You can read his blog here. 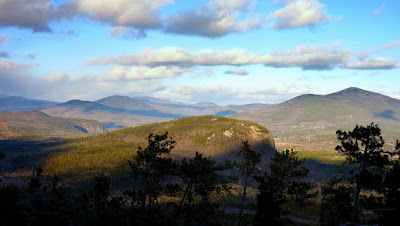 In his blog, Smith explains that “Above the falls, the brook slithered gently over broad ledges.” 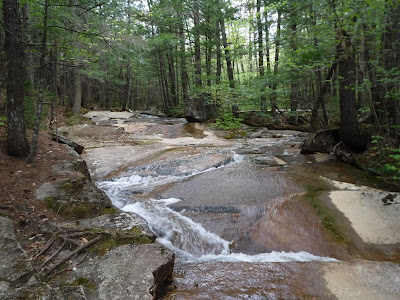 During our four hour hike we had time for a short nap on the smooth, sunny, gently sloping pinkish slabs above the falls.

Then the water speeds up and passes swiftly over a sharp delineation between those rocks and a section of rough, sharp edged, rectangular rocks... 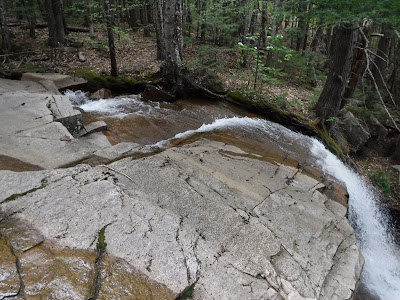 ...and crashes down abruptly... 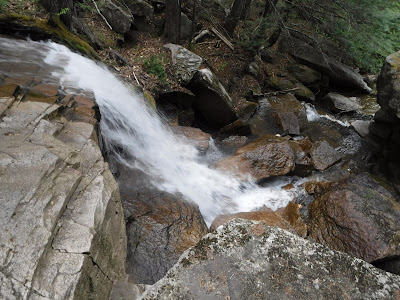 ... into a tumbled jumble of large jagged dark green and grey angular rocks below... 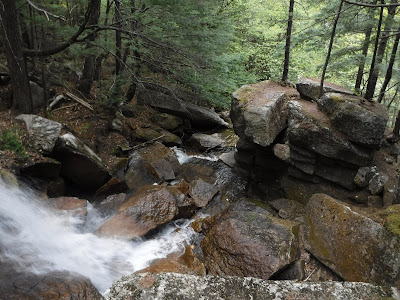 ...that is flanked on both sides by a remarkable dry boulder field. 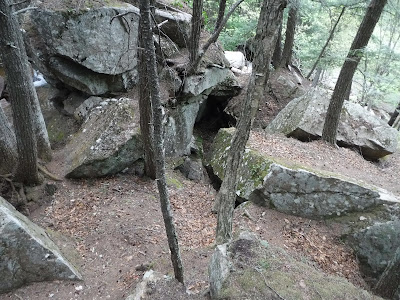 Smith's blog notes that "There's an interesting collection of ledges and boulders below the falls. Sweetser described them as "great masses of shattered rocks." here. pp. 85-86.

They appear fractured as if quarried, but I saw no quarry tool marks among the fairy tale topography.

You can see these rocks on the right side of Champney's painting above.

In his recollections, Champney relates an astonishing tale about these deep chasms, p. 105 here.

"It has remained to this day, a mysterious place, and many visitors have failed to find it after making a resolute attempt. One day young Durand (referring to fellow artist Asher B. Durand), who was sitting at his easel on a flat rock intent upon his work, started up suddenly to view his sketch at a greater distance. In his enthusiasm he stepped too far back, and, to his astonishment and ours, disappeared down a deep chasm. It was equal to a stage trap - door disappearance, and was greeted with shouts of laughter. Fortunately, he was not much hurt, but much mortified."

To a geologist, this common feature of the White Mountains is known as "sheep back" shaped ledges known in French as "roche moutonnee" For more information see this link. 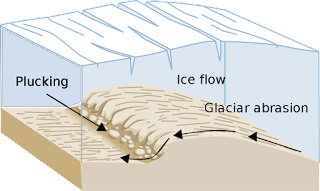 The characteristic rock cliffs that we see are the results of glacial polishing and plucking and ongoing freeze and thaw cycles. 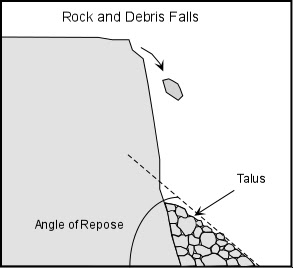 Note the "farthest fallen block" in the illustration below.

After passing through the tumultuous talus slope, the stream settles down through a series of small, subtle, serene cascades... 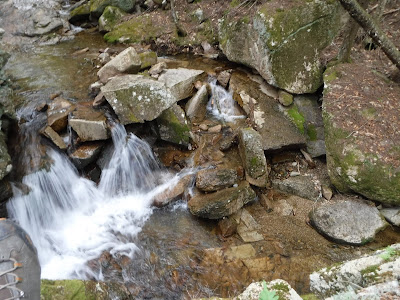 ...and within a short distance empties into several shallow cascades that eventually broaden into deep, cool, emerald green and burnt sienna brown pools, offering a reason to return and swim on a hot summer day. 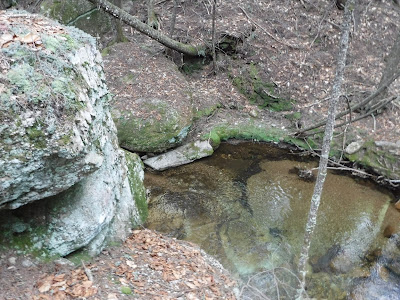 Here is a handy map from the kiosk near where we parked (click on images to enlarge them - then right click on the image and you can save and print the image). 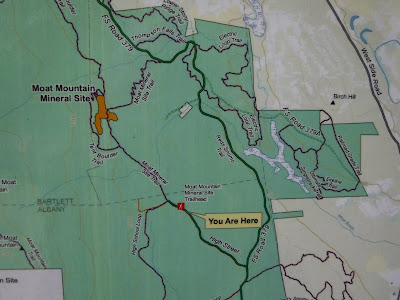 An undated map in the style of the 1950s or 1960s shows a trail to Thompson Falls from North Conway's River Road passing just south of Echo Lake. 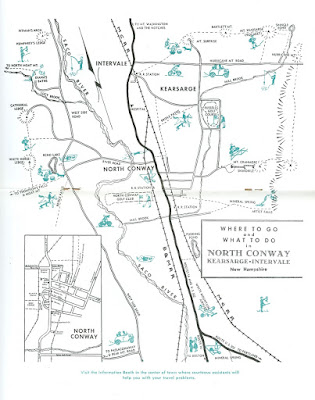 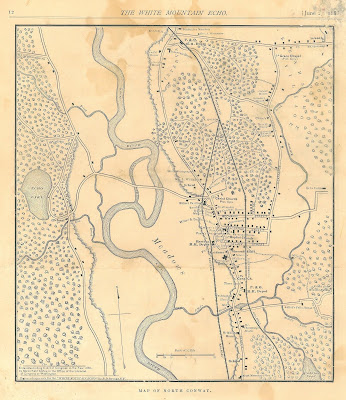 Today the area is crisscrossed with, as my son says, a sick series of mountain bike trails spread out like spaghetti strewn from across a room, or like the roads in Boston. You can see an online map of some of those at this link here. It is always interesting to me to see how "perception of place" changes from one generation to the next while that actual places don't change that much in the short run.