No... it is not "Jaws" or "Star Wars" or "Jurassic Universe." It is the most recent display from the Henney History Room near the main entrance of the Conway Public Library. 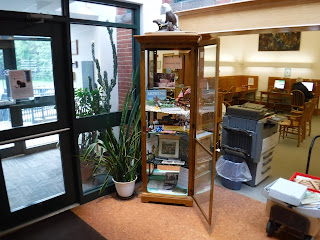 The exhibit focuses on summer traditions. 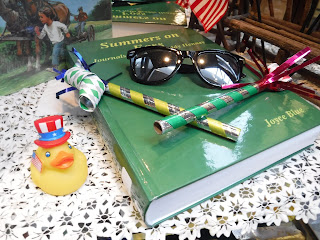 In the center of the top shelf is the book "Summer on Foss" by Joyce Blue. This book examines the many summers enjoyed in Eaton on Foss Mountain by Keith and Nella Henney, the founders of the Henney History Room. Adorning the top of the book are noise makers, sunglasses and a patriotic rubber duck symbolizing the Old Home Weeks, bean hole suppers, parades and Ducky Day fundraisers of the summer. 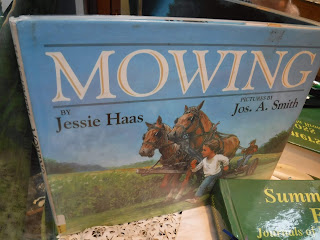 To the left on the top shelf is a children's book on "Mowing." Children's books provide a wonderful exploration of historical topics. This cover shows the use of "heavy horses" pulling a mowing machine. It is a great insight into changing technology and farming practices. See our previous blog about the changing roles of "old iron."

Earlier today, as I drove by the Saco Valley Overlook just before heading into North Conway I stopped to view the progress of haying or mowing on a big field across the Saco River. 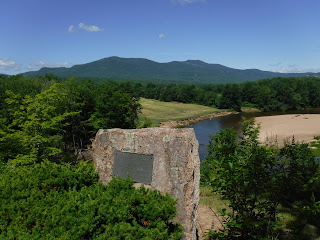 The river in the middle is now popular for kaying. The beach on the right is for summer sun bathing and picnicking. One can often see a Heron fishing in the backwaters near the beach.

In the far distance you can see the remains of older, now abandoned, fields running up the slope of the Moat Mountains, now grown over and returning to forest. Hidden up on that slope is the nearly forgotten Thompson's Falls discovered by our own local artist Benjamin Champney. 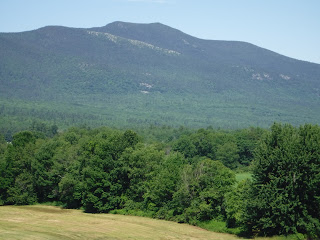 I could still see some patches of snow on Mount Washington and bits of the ledges with long forgotten, but once popular tourist attractions of caves and cathedrals, now popular for hiking and rock climbing. 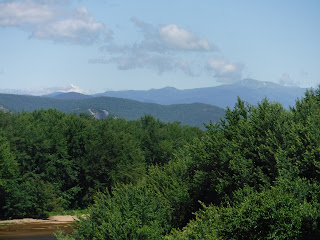 The overlook was established in 1973 by the Pequawket Foundation in memory of Robert H. Kennett in honor of Mrs. Harvey D. Gibson (click on pictures to enlarge them). 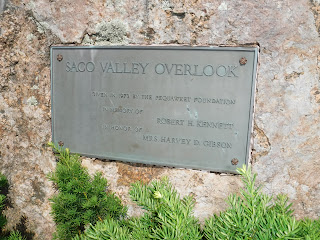 Above the mowing book is a picture of folks swimming under a covered bridge. 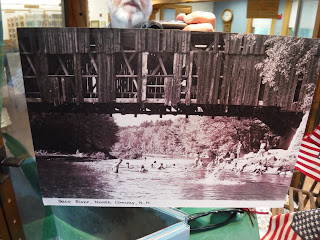 We will be doing more research on swimming holes near covered bridges for an upcoming WMUR Chronicle program.  Another part of the display celebrates the patriotic fever of the Fourth of July. A miniature rustic bench reflects a popular motif used by T.E.M. White and Chase in their photography. 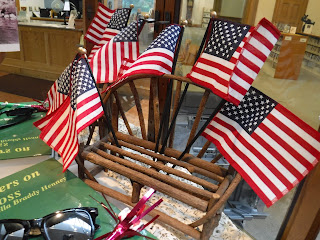 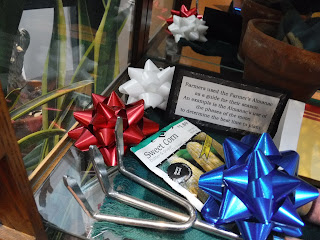 Historically, summer was the key to growing food for New Englanders to survive the rest of the year.
Sweet corn for example supposed to be "knee high by the Fourth of July." 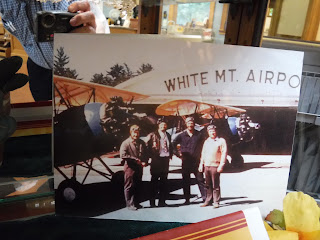 Settler's Green outlet stores now occupies what was once the White Mountain Airport where Wylie Apt would provide aerial tours of Conway and the White Mountains. The next shelf displays three summer related books by the late Donald Hall (September 20, 1928 - June 23, 2018). 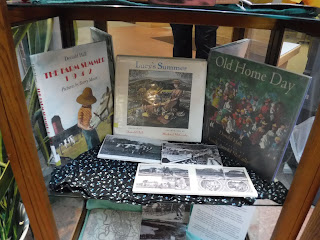 In the foreground is an assortment of images used to promote farming and tourism. 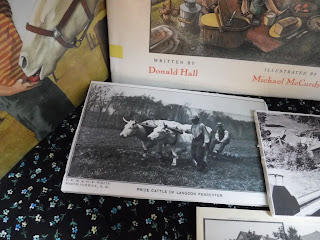 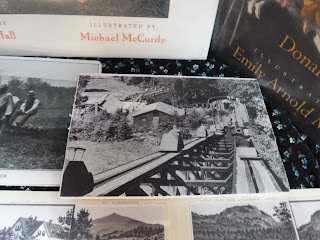 Below are some illustrations from a tourist brochure 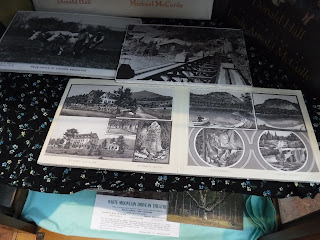 Pictures include Echo Lake and the ledges (now part of a State Park). The location of Cathedral cave and Pitman's Arch rock formations are known to only a few now.

On the bottom shelf, is a map known as the Idler map. It is a wonderful resource with many interesting details. 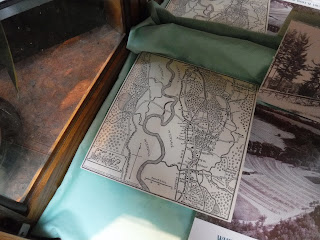 It shows the location of "White Photographer," and the Whitaker Bros house and barn. The house is gone, but the barn remains. On the map you can see the foot paths that are now Whitaker Woods. 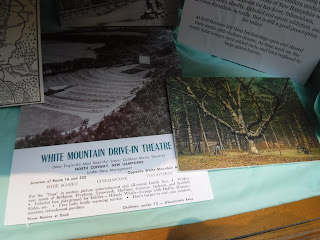 The bottom shelf also shows the old Drive-In Theater, now a housing development and the once famous Wizard Birch that was in Cathedral Woods near the Abenaki Gift Shop.  For more details on summer in the Conways and the White Mountains please visit the Henney History Room at the Conway Public Library.