In previous blogs we have reviewed various stages of the Conway Public Library's construction from cellar to shingles from the excavation of dirt, to the rough split foundation wall stones, to the brick work, and carved stone work. Now we ascend above all that to the copper clad roof. 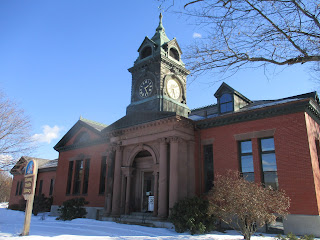 By comparing the current building with the original concept rendering... 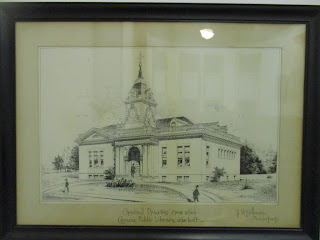 ... and an early photo of the building as built, we can see what remains, what is missing, and what was recently rediscovered. 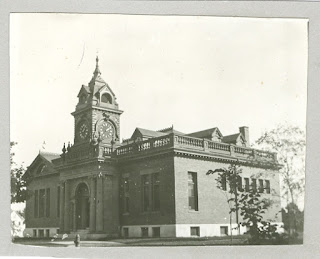 But first a bit of history.

In the Roman era, copper was principally mined on the island of Cyprus. According to wikipedia, the name copper derives from the old English cuprum which in turn was derived from the Latin Aes Cyprium or metal of Cyprus.

Now, let's look at a detail of the photo above that focuses on the balustrade that once encircled the edge of the roof. The balustrade was removed around 1960.

Here is an even closer view. 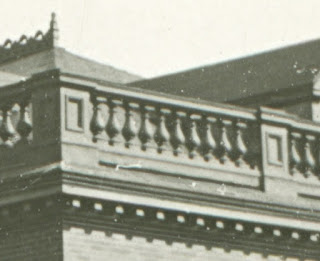 And here is a sketch of the components of a balustrade system. 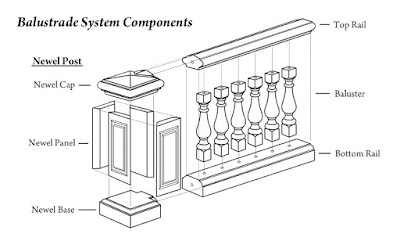 Recently our Library Director, David Smolen, risked life and limb and lung to recover three of the original pressed copper newel panels from the original balustrade that had been stored in the attic. They can now be studied as part of the Henney History Room collection. 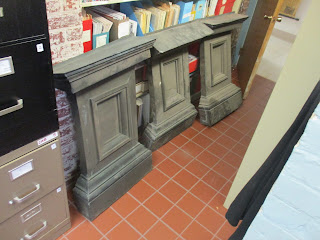 The overall measurements of these copper panels are 26.5 inches wide, 38 inches high, and 7 inches deep. The entire surface of each panel is slightly corrugated adding strength to the thin sheet metal as well as providing a decorative texture to the finish. 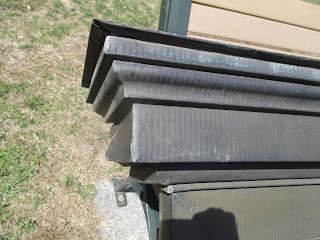 The shape of the Newall panel cornice approximates the classical arrangement of the ionic order, including a simplified but recognizable cymatium and corona.

While the outside of the panels have been exposed to the weather and acquired a green verdigris patina, the interior of the panels retain their original reddish orange copper color. 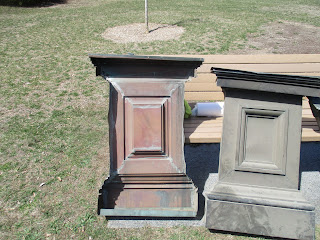 These fragments of original artifacts enable us to quiz out construction details.  A close examination of the forms reveals the use of overlapping folds and flaps bent over, riveted and sealed with lead solder. 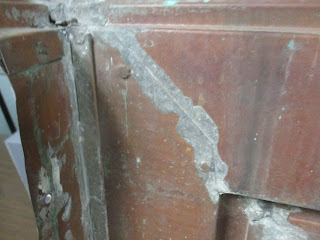 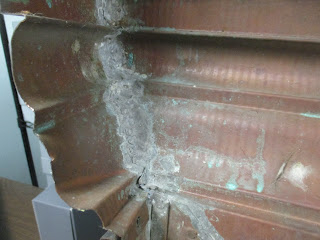 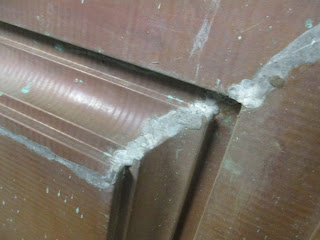 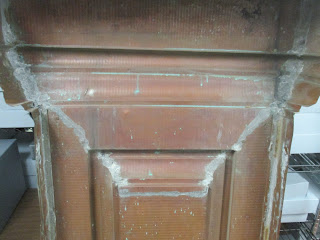 While most rivets are copper, there is also evidence of brown rust indicating ferrous or iron elements, perhaps a repair? or mistake? 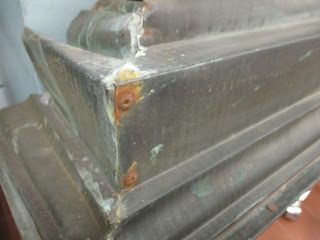 Testing my hunch with the magnet on my handy name tag confirms it is ferrous. (Copper does not attract a magnet). 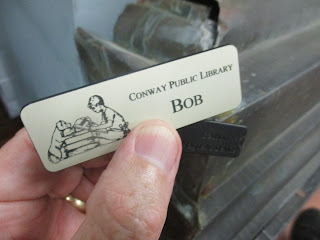 Now we return to our original primary source materials, the concept rendering or sketch and the historic photos to look at some other missing elements of the balustrade. 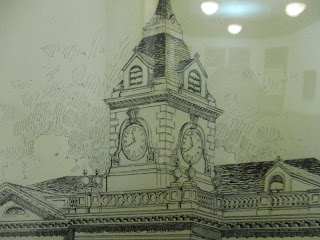 The sketch and early photo confirm that... 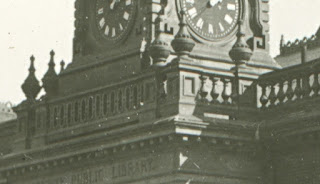 ...the balusters changed from vase to oval shaped in the front section over the entrance. 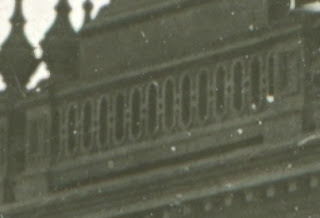 While dentils are shown in both the concept sketch and the photo above, these images also show the limitations of primary source documents. These archival records do not reveal what the actual artifact, the library building itself, can show, that the dentils change from being made of carved stone to copper sculpted along the facade. 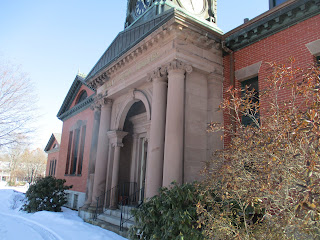 Detail that stone to copper transition. 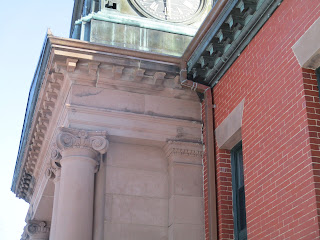 A decorative copper finial can be seen at one corner of the roof. 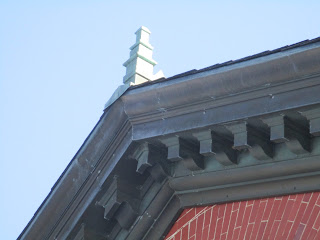 Between the finials was a decorative fretwork or cresting that added an ornamental touch to the roof ridge...

...which can still be seen in some places on the roof today. 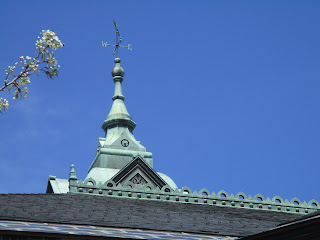 In the picture above you can see the many small circular snow guards installed on the slate part of the roof. (Click on the image to enlarge it). 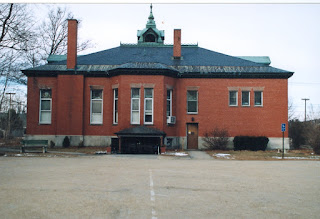 Now to the clock tower itself. 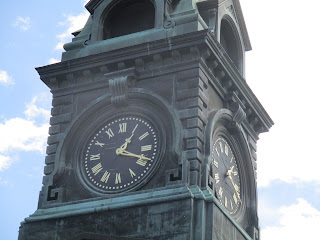 Now look at the elements of the copper clad clock tower. In a previous blog looked at how this was documented for fire insurance purposes on Sanborn map.

Today you can still see many of the original decorative motifs, including dentils, quoins, arabesques, modillions and the greek key (see our previous blog meandering around the library).  The early photo of the building shows a series of interesting vase shaped items surmounting the balustrade around the clock tower. 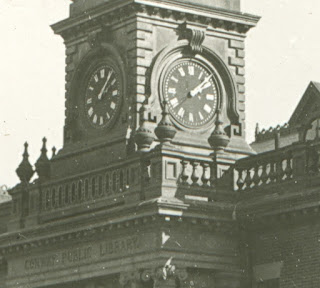 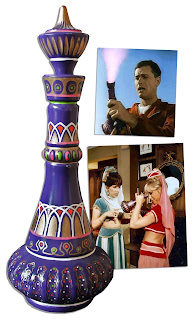 Of course, everyone knows that Jeannie's favorite activity while in her bottle is to read books checked out from the Conway Public Library. 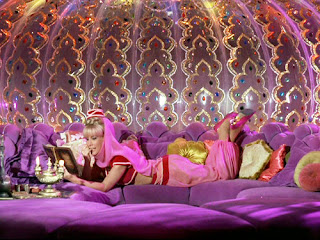 But seriously, who was behind all of this decorative copper work at the library. Well, as before the answer can be found in our "red" reading room in the northwest corner of the library. There you will find a photo of the copper and slate contractor Frederic S. Hicks and a caption explaining his role. 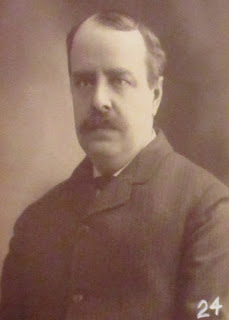 A quick internet search on him and his company leads to an interesting display they did at a trade show in Boston. 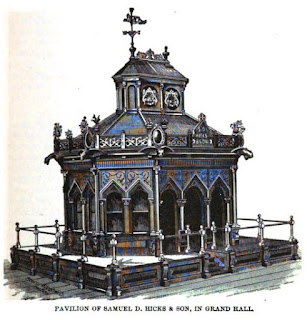 This pavilion display won them a silver medal. 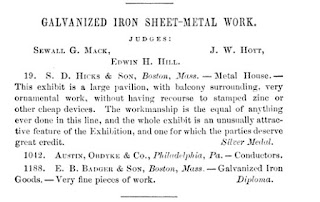 In this somewhat aerial view of the library before the expansion, you can see that the copper part of the roof only is exposed along the edge, and then turns to slate. We will explore the work of the slater in a future blog. We will also leave it to a future blog to examine the weathervane in more detail. 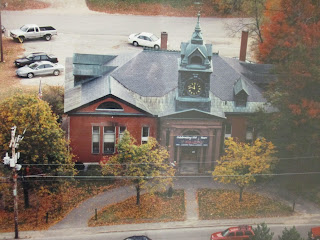 Until then, let me say CU later (that is a chemical copper joke - look it up).

Posted by Mount Washington Valley History at 8:21 AM