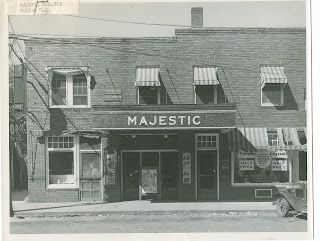 Graduation season is here. It is an important time to take stock of the past, present and future. We recently received a donation of a 1939 graduation notice. It reads “The Senior Class of Kennett High School announces its Graduation Exercises on Tuesday the twentieth of June nineteen hundred thirty-nine at two-thirty o’clock Majestic Theatre Conway, New Hampshire.”


Also included in the donation were six photographs documenting both the inside and outside of the theater. We hope to learn a lot about the Majestic by carefully studying the signs, old cars, landscape features and people in the pictures. We would love you to comment and help us identify some of the details.


For example, you can see a couple different movie posters in the scenes. In one photo they were showing the film, “Bring on the Girls” starring Veronica Lake dating that picture no earlier than 1945. The Majestic Theater also plays a starring role in the film “Conway Boy” which was featured at the recent history fair at Pine Tree School.

To learn more, all these items can be explored at the Henney History Room of the Conway Public Library.
Posted by Mount Washington Valley History at 12:42 PM